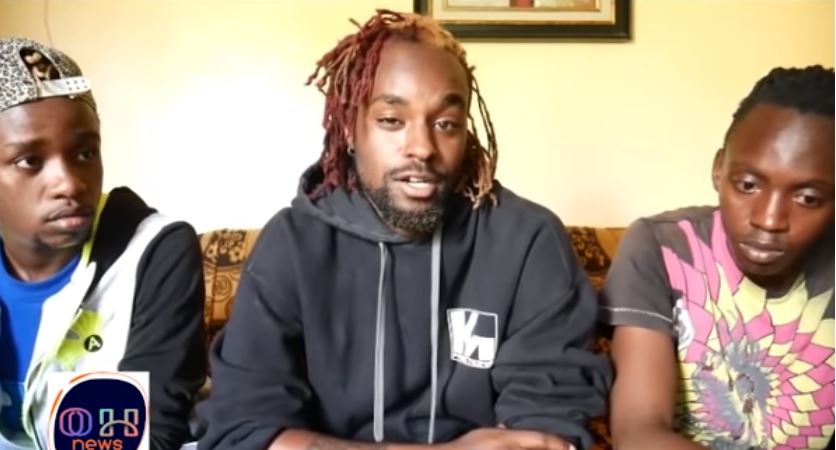 Hitmakers of a controversial song dubbed ‘Pigwa Shoka’- Swahili for ‘get hacked with an Axe’ – have issued a statement apologising to Kenyans and the family of the late Ivy Wangechi.

The musicians, Sheddy Empire, have also come under fire from Kenya Films Classification Board (KFCB) chair Ezekiel Mutua. The moral cop on Sunday, while responding to a complaint raised by Terryanne Chebet, asked the DCI to find and arrest the upcoming musicians.

Hours later, Sheddy released a video on YouTube saying they didn’t intend to advocate for femicide with the song.

Sheddy Empire producer, who identified himself in the video as ‘Kashni’, said they produced the song out of their creativity. He was accompanied by two other artists.

They explained that they too have sisters and female relatives whom they wouldn’t want to be harmed or attacked as was the case with Ivy Wangechi.

At the same time, the artists have since written to Ezekiel Mutua requesting for a meeting. They are promising to donate 10% of their music income to sensitize against violence on women and another 10% to fund their Street Children Campaign.

However, Kenyans online were left unconvinced by the apology saying it was insincere and that there was no creativity in the song.

One Kenyan wrote, “The minute you said “if in any way tulikosea” dude mlikosea!!! ?”

Another added, “There is nothing creative about it! You were just trying to get your five seconds of Fame. This is the most insincere! apology I have ever seen.”

“If that is creativity, then creativity has lost its meaning… you guys ought to be ashamed of yourselves,” a third commenter said.

“He cannot express himself in English but can compose stupid songs, useless!” blasted another.

Another YouTube user said, “You deserve to be flogged naked at Uhuru park. thank God you ain’t my son. I could have dealt with you.”

“What an insincere apology. Advocating for violence against women does not count as art or creativity. The video and song are in poor state and belittle the experience women that have experienced violence at the hands of men. You can do better,” wrote another.

Watch the apology below.

Assa Nyakundi’s Wife, Son Listed as Persons of Interest in Alleged Murder Cover-Up < Previous
Hilarious Meme Compilation (Tuesday May 7) Next >
Recommended stories you may like: