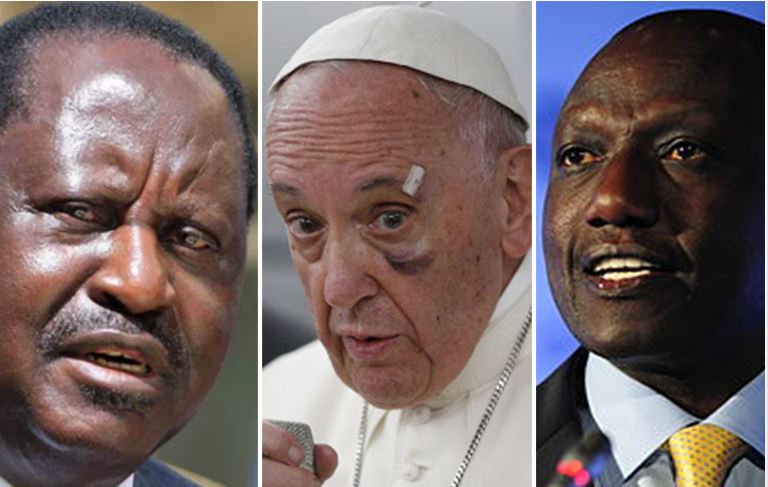 Kenyan politics is heating up once again courtesy of top leaders, Raila Odinga and the Deputy President William Ruto.

The two supposed frontrunners for the Presidential seat in 2022 have been trading jibes in public over a number of issues, including Ruto’s car gift to Kisumu Archbishop Phillip Anyolo, the dams scandal, and corruption allegations.

The top-level political rivalry between the two took centre stage for the second day at the Sixth Devolution Conference in Kirinyaga on Thursday.

This time, it was DP Ruto’s turn to respond to Raila, who on Wednesday accused him and his allies of interfering and politicizing the war against corruption.

Raila also questioned how Ruto knows that Sh7 Billion had been lost in the Arror & Kimwarer dams scandal and not Sh20 billion as stated by the Director of Criminal Investigations.

In his speech on Thursday, DP Ruto said he knows because he is in government and it is his responsibility to keep records of how public funds are spent.

“The question that I am being asked is akin to a hyena asking a herdsman: ‘What is the interest in your herd, and why do you know the number of the livestock you are keeping?’ Why wouldn’t a herdsman have an interest in the number of herd he is keeping?” posed the DP.

He joked that these things only happen in Kenya.

“Unajua hii Kenya iko na maneno, and we are very interesting people. In the last election, you [Mr Odinga] said your competitor stole the Eurobond. Now, you are accusing the person you perceive to be your future competitor as the one stealing money from dams. And if you are asked: ‘Sasa mkubwa, hii evidence utapeleka Karura ama pale EACC, unasema hapana… Najua nyinyi ni wezi kwa sababu nilipigiwa simu na Baba Mtakatifu… Ati, ‘I was called by the Pope’. Really, wewe ulipigiwa simu na Pope? Kweli? Aaah, Kenya… It only happens in Kenya,” said Dr Ruto.

Below is part of DP Ruto’s speech at the Devolution Conference.

Laikipia County Butt of Twitter Jokes After Unveiling Sh450,000 ‘Car’ at DevCon2019 – PHOTOS < Previous
The Top Stories on the Internet Today (Monday March 11) Next >
Recommended stories you may like: