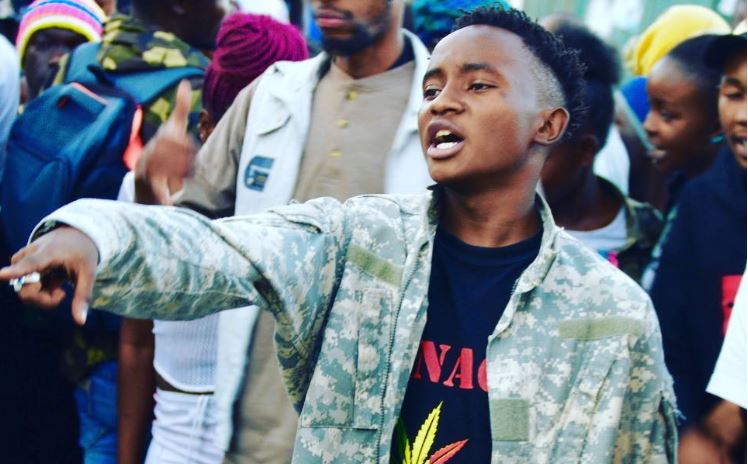 Rapper Boniface Mwangi alias SWAT Mtoto wa Eunice, who is part of the fast-rising “Lamba Lolo” hitmaking group – Ethic – based in Eastlands Nairobi, is not a thief.

This is according to John Mbugua, the manager of the crew known for street anthems such as “Position”, “Saba”, “Instagram”. Mr Mbugua’s statement comes after Swat Mtoto wa Eunice had quite a weekend to forget when he was mistaken for a burglar and given a mob beating in Umoja estate on Saturday night.

A video taken moments after Swat was beaten has since gone viral on the interwebs with misleading reports claiming that he was caught breaking into a house.

But according to Mbugua, Swat was running away from police officers who were on patrol when he sought refuge in a residential building. Thinking he was a thief, the residents pounced on Swat and a friend who was with him, cornering them and beating them up.

Some reports indicate that the angry mob even cut off some of Swat’s dreadlocks during the attack.

“Police were doing raids in Umoja, carrying young people who were out and about, so when kina SWAT saw cops coming at them they ran away and entered an unknown plot. So the people in the plot thought they were thieves and started flogging them. Luckily the police intervened after a short while. And he was set free since they were innocent,” Mbugua said.

The manager further noted that Swat had no need to steal seeing as he had just been paid after performances on Friday.

“If he was caught stealing he’d be in a cell right? I don’t know about the stories online but cops were definitely involved and if he’d committed any crime, he’d be in a cell as we speak. SWAT is not a thief! If anything we’d just done some shows on Friday and he was quite loaded,” Mbugua said.

Following the video doing rounds on social media. We want people/ our fans to know what happened. Yesterday at around 11pm Swat was hanging out outside their apartment. At the same time police officers were doing rounds handcuffing any young man they found outside. Swat and one of his friends saw this and sought to run away so as to not to get arrested. They ended up entering a random apartment and hid there but people who lived in that plot/ apartment, thought they were thieves since they’d never seen them at the apartment. They started flogging them and beating them up, at one point they nearly burnt them. Luckily the same police officers who saw Swat and his friend run away as they were getting away from them came to their rescue and released Swat and the friend since they were obviously innocent. Swat sustained a couple of injuries and is currently recuperating at home. For those of you spreading videos around claiming that Swat is a thief, now ask yourself- who would be stupid enough to steal with a T-shirt that has their name written on it and wearing crocs while at it ?? Anyway, to our loyal Fans. We’ll BOUNCE BACK!

Here’s a video of Swat writhing in pain following the beating.

Swat of Ethics Music Group getting a beating right now for allegedly breaking into my neighbors’ house. Why waste such a talent, this kid has a bright future. So sad indeed! Instead ya kulamba lolo saizi analamba mangumi mbaya! pic.twitter.com/dQE3xsay5B

“How I Made My First Million,” Makeup Vlogger Joanna Kinuthia < Previous
Hilarious Posts by Kenyans on Social Media to Take Away Those Monday Blues Next >
Recommended stories you may like: