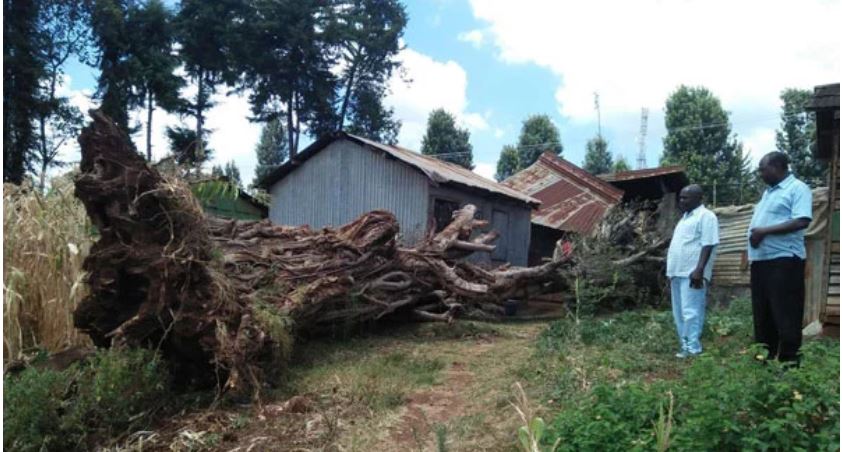 Panic and anxiety gripped residents of Kerugoya in Kirinyaga County after a Mugumo tree came crashing down.

The sacred tree, believed to be more than 100 years old, fell between two houses missing each by inches. No one was injured during the incident which attracted the attention of Kikuyu elders from the region.

Area residents are now living in fear that a calamity is likely to befall them because the sacred trees, under which sacrifices are offered, rarely fall.

“We understand that when a Mugumo tree falls, something unpleasant might happen,” said Ms Mercy Muthoni, a resident.

“What is so surprising is that none of the two houses was destroyed. The owners also escaped unhurt,” said Mr Thomas Theuri.

“This is the first time for a sacred tree to fall in this area since independence. Something urgent must be done to appease our god,” another resident added.

Elders who visited the area called for an urgent cleansing ceremony before ill omen strikes.

“The place where the tree stood might have been profaned and the spirits might be angry. To appease out god’s spirits, we must perform a cleansing ritual very soon,” said Mzee Mwangi wa Ndung’u.

The Elder told the residents not to interfere with the tree before the ceremony is conducted.

“They should not use the tree for firewood or any other work. Once the sacred tree falls, it is supposed to remain as it is until some rituals are done by elders without blemish,” said Mzee Mwangi.

According to traditions, elders are required to remain secluded for a few days observing holiness before they perform the cleansing ritual.

Watch: Willy Paul Teams Up With Rayvanny in New Love Song < Previous
Is Nick Mutuma Getting Old? Netizens Think So – PHOTO Next >
Recommended stories you may like: