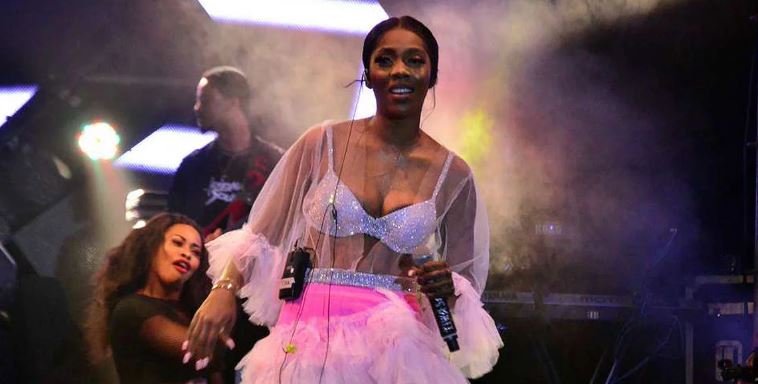 Tiwa Savage has been consoled by Kenyans on the interwebs after she was left stranded at a Nairobi hotel over unpaid bills.

The Nigerian songbird was a guest act alongside Jamaica’s Demarco at the launch of Redsan’s album ‘Baddest‘ on Saturday at the Carnivore grounds.

In a series of Tweets on Monday morning, Tiwa Savage called out promoters of the event, claiming they failed to settle her hotel accommodation at Sankara Hotel in Westlands. She further claimed that the promoters did not cater for her transport from the hotel to the airport.

Worse still, their phones were switched off.

Tiwa’s pain was evidently felt by many Kenyans on Twitter, who apologized to her and blasted promoters for embarrassing the country. They also reminded Tiwa Savage that Kenyan promoters have a reputation for duping music acts.

Read the tweets below:

Checking out of the hotel and full accommodation not paid for, no car to take us to the airport and promoters want to talk trash about artists

I love KENYA always have and always will ??❤️❤️❤️

Its a Kenyan problem tiwa.. Our rugby players get stuck in airports.. David rudisha had no tickets pole.. @redsanmusic ulikuja kutesea tiwa huku?

This is what is sad about Kenya. A foreigner is mistreated by the same promoters who say Kenya has a dying music industry, then Stupid low thinking idiots come to make fun instead of thinking how this negatively affects the image of their country!! this is why Chinese mistreat us

In Kenya artist don’t show up until full payments are done.. It’s doesn’t matter if you trust your manager or not… It’s a culture here.. ?

You have bad management But welcome to Kenya???

So Savage. Feeling sorry for everything Tiwa. The show was lit..that’s not how they should hundle you. Kenya Kenya Kenya kweli Tom Mboya ameshika tama.

Is there anything that Kenyans can get right or are we just doomed? Talk about politics, state of the economy and now even entertainment with an uncompensated Tiwa Savage. Come on people! Can we just get one thing right? Just one!

What exactly is our problem??

We need to re-evaluate ourselves as Kenyans. We often blame those in power but we as a society are rotten.We’ve completely lost a sense of what is good & moral.Soon, no outsider will want to associate with us.Tiwa Savage’s already broadcasting the reputation.

The Hottest Stories on the Internet Today (Tuesday September 18) < Previous
Watch: Willis Raburu Topples over During High Speed Quad Bike Ride – VIDEO Next >
Recommended stories you may like: