Who will stop this man Nyakundi?

Just days after getting it on with television personality Pierra Makena over her body count, the infamous blogger has now fired shots at his next female targets, including the recovering Jahmby Koikai.

It all started from the latest viral video by the equally notorious misogynist Andrew Kibe. In the video that has ruffled many a feather, the NRG radio presenter opines that it is man’s world and that successful women need to humble themselves

“This is a man’s [expletive] world. Whether you like it or not, this is a man’s world. There is nothing as disgusting as a woman who’s not humble,” says Kibe in part.

Seeing as Nyakundi and Andrew Kibe are of the same ilk, the blogger took to his social media to share Kibe’s video and endorse his message.

However, Nyakundi was quick to jump to Kibe’s defence and attacked the trio. He called on Kenyan men to boycott and block them.

In fact, Nyakundi wants Kenyan men to stop donating towards Koikai’s medical fund as she continues to battle endometriosis. 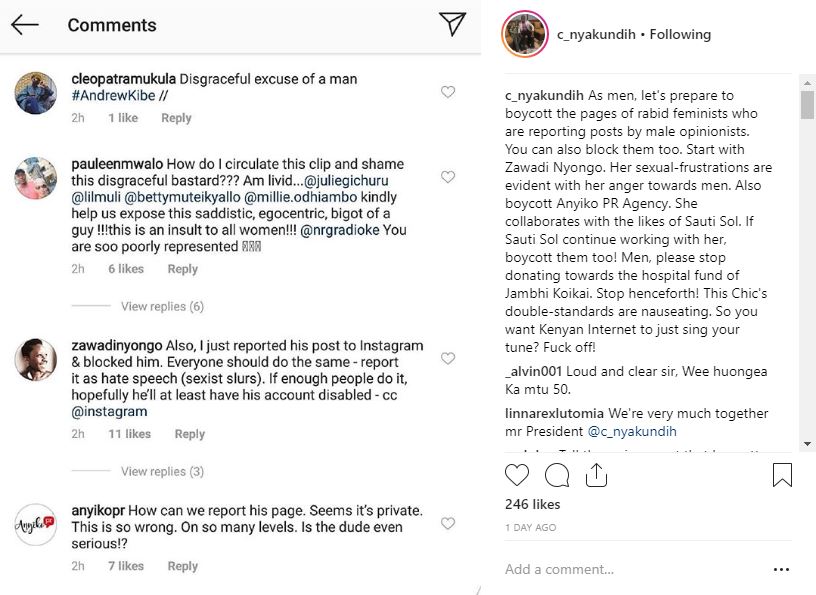 However, Koikai was gracious in her clap back and wrote:

“I’ve just seen someone asking people or rather men not to donate to my medical fund. That’s ok. We can’t support abuse and degradation of women. This is hurting women .This hurt me. Considering the amount of pain I’ve been in and other women suffering in silence. You can call me all sorts of names but that doesn’t change who I am.”

I reached out to the necessary people who are in charge. They’ve heard me and we await to see if they will do something about it. Sexism and misogny should not be allowed. We have to stand for the truth in our society and call out the wrong elements. I’ve been unwell for the past few days and to see a man abusing us and objectifying us was petrifying. It’s painful to see the level of abuse. He spoke of periods and a sex position because we are objects. He called us dogs and how independent women are unattractive. We cannot condone this. Hope those i spoke to will do something about it. I know it’s for ratings but we can’t allow this kind of abuse to keep going on. I’ve just seen someone asking people or rather men not to donate to my medical fund. That’s ok. We can’t support abuse and degradation of women. This is hurting women.This hurt me.Considering the amount of pain I’ve been in and other women suffering in silence. You can call me all sorts of names but that doesn’t change who i am. The ones who truly know me, know me. My instagram page is as active as an energizer battery. You can troll us. Spread the rumors. Make fun of my condition and my fundraising process. It’s not an issue but we are not going to tolerate anymore abuse and insults. Also attack me if you must but not my friends. They commented on my post so don’t drag my people into this.