Don’t Panic, Uhuru Will Will Stop 16% V.A.T on Fuel – Raila to Kenyans 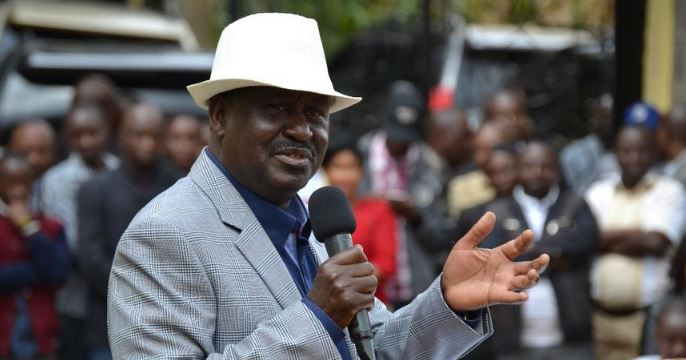 This comes following a nationwide outrage after Treasury Cabinet Secretary Henry Rotich effected the new tax despite Parliament voting to postpone the implementation of the VAT until 2020.

Speaking during the National Government Affirmative Action Funds Football tournament at Kenyatta Sports grounds in Kisumu on Sunday, Raila Odinga urged Kenyans not to panic over the hiked fuel prices saying they will soon be reversed.

The National Super Alliance (NASA) chief said he was optimistic President Uhuru Kenyatta would block the increment once he assents to the amendments by the National Assembly on the Finance Bill 2018.

“The issue of increasing fuel prices cannot continue, it has to stop,” said Raila.

“Members of Parliament already made amendments to the (Finance) Bill and removed the 16% V.A.T, (President) Uhuru will intervene very soon, just wait and see.”

He added: “You should not panic at all. Very soon the President will scrap off the heavy levy on fuel products. He listens to public outcry.”

The former Prime Minister also reiterated his support in the President’s ongoing fight against corruption. He said those involved in corruption will not be spared irrespective of their status in society.

Raila pointed out that the fight on corruption was not targeting individuals or communities.

“Corruption is not targeting a particular community or leader but only those who have acquired public funds illegally,” he said.

Raila also called on the Asset Recovery Authority to move with speed and recover stolen public assets and monies.

16% VAT: Babu Owino Vows to “Fight Govt Ruthlessly” After Holiday in South Africa – PHOTOS < Previous
The Hottest Stories on the Internet Today (Tuesday September 4) Next >
Recommended stories you may like: