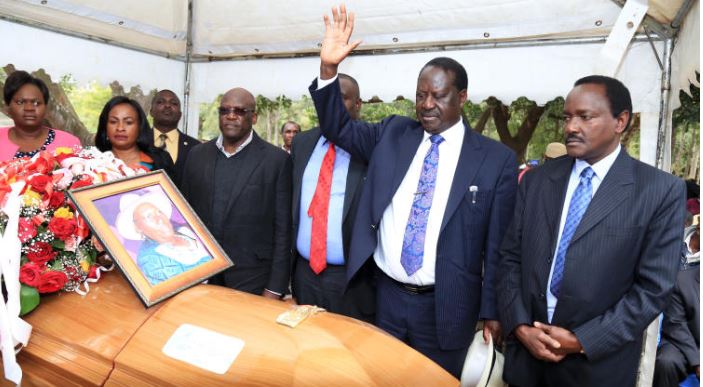 NASA coprincipals Raila Odinga and Kalonzo Musyoka have lauded Uhuru’s war on corruption and asked him not to relent in the ongoing purge on cartels.

The Opposition Chiefs observed that it is possible for Kenyans to be pulled from the shackles of poverty if the leadership of the country maintained the pace and goodwill to dismantle corruption in all levels of the Government.

The two leaders were addressing mourners at the burial of former senator Johnstone Muthama’s aunt, Christine Kalinzoya, at Tala in Machakos County yesterday.

They described corruption as the greatest impediment to the establishment of a just society.

“Corruption and plunder of public resources has become widespread in the country, which is why most Kenyans remain poor. ”

“We have agreed with President Uhuru Kenyatta that we must tackle and deal with it at any cost,” said ODM leader Raila.

On his part, Wiper leader Kalonzo echoed Raila’s sentiments and further urged the President to name the individuals who were asking him to go slow on the graft purge.

This after Uhuru said that he had lost many friends in the war against impunity.

“Over the last few weeks I have lost many friends. Many have called me asking ‘ how can you be watching when all the destruction is going on?’ I say a time has come to fight impunity,” Uhuru said.

“We must move our country forward and it will start with ending corruption and impunity,” the president added.