Kenya Wildlife Services wardens have killed a crocodile and slit open its stomach in search of a body of a girl who was reportedly mauled by reptiles at the Kiambere dam in Karura village, Embu County.

Mawia Mwendwa King’ola, a Standard Two pupil at Karura Primary School, had been sent to fetch water at around 6 pm on Tuesday when the attack is said to have happened.

The Ward Representative said he had contacted the local Kenya Wildlife Services officials who started a rescue operation on Wednesday morning. 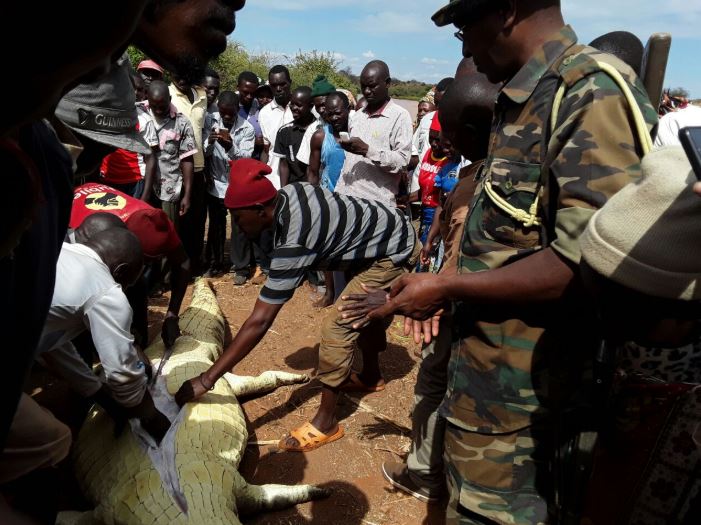 The incident has sparked reactions from Kenyans who accused the embattled KWS of incompetence in the handling of the matter.

One social media user posed: “How do you expect to find a body in a crocodile’s belly, the animal does not swallow its meals whole, I thought KWS wardens should know this!”

A third commented: “These guys should be sent home for the competent team to take over.”

Another was sarcastic as he advised: “Here is an idea kwskenya. continue killing them, one by one, until you find the child. isn’t that brilliant?”

A fifth commenter wondered: “does that mean they’ll kill all the crocodiles in the area in search of the body. Just wondering.”

While another said: “It’s very painful that some people can be this stupid and ignorant in this time and age..but the leadership has shown them the way Najib Balala and KWS..See your proteges are learning very Quickly…..What are X-Rays for?? Simple logic…”

“Are you still going to tell KOT to go to hell after this? Umemaliza rhino Sasa umeanza crocodiles!!!!” another asked Wildlife CS Najib Balala.

“How stupid can we be..?? It’s now nauseating,” another exclaimed.

Uhuru Kenyatta: We Will Continue to Demolish Properties on Riparian Land < Previous
My Son Asks Why I’m not With his Father, ‘Wilbroda’ on Single Motherhood Next >
Recommended stories you may like: