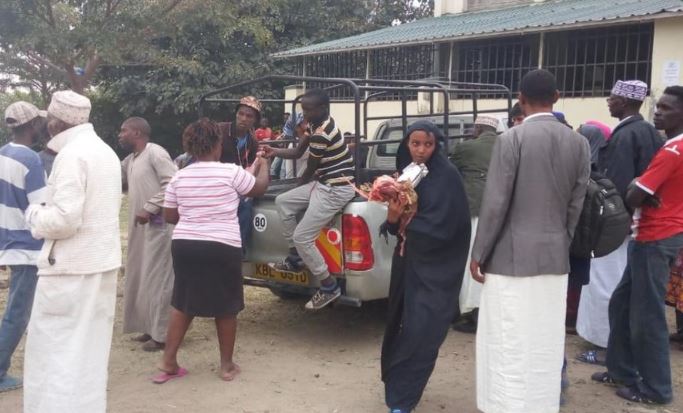 There was drama at the Athi River Mosque in Machakos County on Tuesday after residents scrambled for free meat during Eid ul-Adha celebrations.

The area locals, comprising both Muslims and Christians, are said to have engaged in a 15-minute scuffle when they were told by the mosque’s leadership to queue to receive the free meat.

The leaders stopped the exercise momentarily and sought the assistance of armed AP officers before proceeding with the donations under tight security.

Sheikh Ali Abdallah Omar, the local Imam, blamed the chaos on non-muslims who attempted to use force to get the meat.

“Non-Muslims were using force in an attempt to get the meat, that’s why we sought for reinforcement from AP officers,” Omar said.

He said 1,000 Muslims and more than 500 non-Muslims received the donations of meat and bacon.

“We have slaughtered cattle and goats and shared with the less fortunate members of the society including our Christians,” said Omar.

The Imam called on Muslim leaders to unite to avoid splinter groups after the Chief Kadhi Ahmed Muhdhar said the celebrations should be marked on Wednesday.

Omar said situations in which Muslims celebrate Eid ul-Adha in two different days should not arise.

“The Kenyan Constitution recognizes the Kadhi Court. There are several institutions that deal with Islamic issues. We have confidence that if Muslim leaders come together and agree, there would be unity and togetherness in the religion,” Omar said.

The Hottest Stories on the Internet Today (Wednesday August 22) < Previous
I Locked Myself in the House for Months, Gospel Singer Kris Erroh Opens Up on Depression Next >
Recommended stories you may like: