The media regulatory agency has written to Jeff’s employers, the Royal Media Services flagging his behavior during the interview as unethical.

In the letter, MCK CEO, David Omwoyo cites various instances of unprofessionalism by Jeff Koinange, including discussing personal and sexual matters with Atwoli, against clause 13 of the Journalist’s code of conduct which states inquiries into an individual’s private life are not acceptable.

“(Koinange) breached clause 13 of the Code of conduct for the practise of journalism on protection of privacy. The article states that inquiries into an individual’s private life is not acceptable and things concerning a person’s home, family, religion, sexuality, personal life and individual’s private affairs shall not be allowed,” read the notice of complaint from MCK.

“The host was persistent in discussing explicit adult related content on TV outside the watershed hour contravening clause 10 on obscenity, taste and tone in reporting of the code of conduct for the practice of journalism in Kenya,” added MCK.

MCK now wants Royal Media Services to present the council with steps to avoid such an occurrence in the future.

“By this letter, the media council wished to inform you that it reserves the right to take disciplinary action against the host of the programme and the media in view of the contravened clauses.” 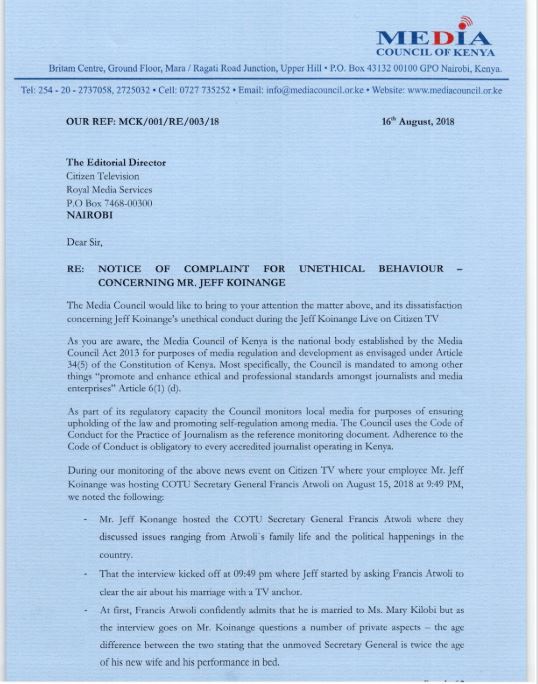 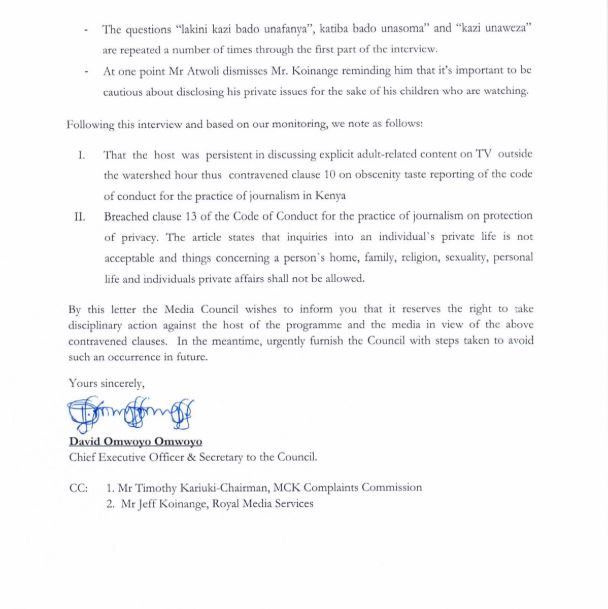 This is not the first time Koinange has courted controversy for unethical behavior on live TV in a desperate attempt for increased viewership.

Prior to joining Citizen TV, his contract with KTN was cancelled after he appeared to laugh off and tolerate obscene comments made by Miguna Miguna in reference to Nairobi Woman Representative Esther Passaris.

Liquid Telecom Set to Roll Out Internet of Things (IoT) Network Across Kenya < Previous
The Hottest Stories on the Internet Today (Monday August 20) Next >
Recommended stories you may like: