Of all the jokes we have heard this year, this one is up there. Apparently, Mombasa city can easily be mistaken for Miami, according to a certain Kenyan on Twitter.

The popular Kenyan on Twitter, Ahmed Mohamed, an executive member of the Eastleigh Business Community, was the subject of online trolling after sharing pictures of the new look Mombasa and compared it with Miami.

This comes as Mombasa Governor Hassan Joho and his govt. continues to make the tourist hub more aesthetic. One of Joho’s directive compelled commercial building owners in the central business district (CBD) to paint their premises white and blue.

“We picked the colour blue because it represents our heritage, the sea that is around us. The ocean is dear to our hearts. As a people, we encounter it every day. People are asking why, but Mombasa has always been a tourist destination and we want to regain what we had lost,” Transport, Infrastructure and Public Works County Executive Tawfiq Balala said earlier this month.

Meanwhile, Joho’s online battalion has been pushing the hashtag #MombasaRising on Twitter where they have been sharing pictures of the new-look Mombasa.

However, one Ahmed Mohamed appeared to exaggerate as he Tweeted: “No. It’s not Miami. It is Mombasa, Kenya. Amazing.” 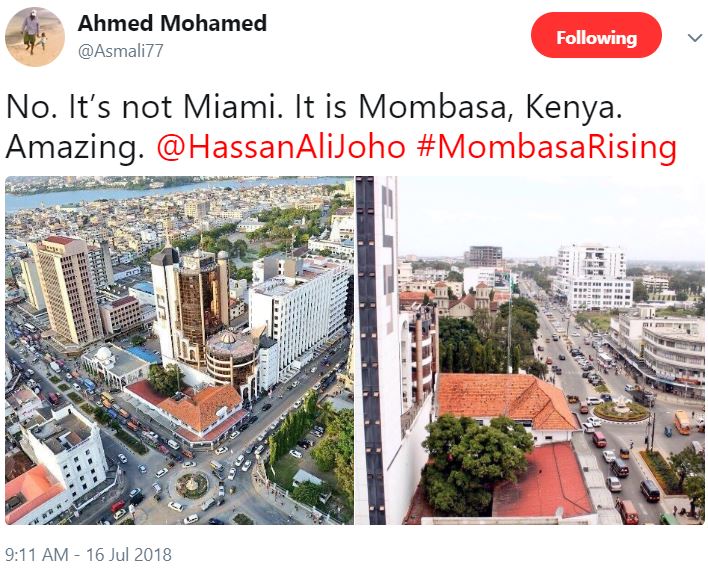 This was not received by the ever-skeptical Kenyans on Twitter, who poked fun at the Miami claims.

…of course, how could we have guessed…..? pic.twitter.com/FOlK6B8XfM

Lol Asmali. Did someone think it was Miami ?

And where does it look like Miami? show us the dumpsites along the streets too.

Who thought it was Miami?

This is Miami
Mombasa not ever an inch to Miami beauty pic.twitter.com/OKrTcAPK5H

Nobody thinks this was Miami lmao ???

You can do better boss!??

What is that you are taking??

In confused and tired. Can’t see the Miami pic.twitter.com/rnmBui1F0Y

Is the Miami on the left? pic.twitter.com/knfUWGuZZO

Now I’m depressed. What is life if you can’t see the Miami here.
Fuck life pic.twitter.com/yDNPpRgWbJ

Why would anyone think this is Miami? https://t.co/WKbdiPFsWP

Prison Warder Who Ran Over KU Student Pleads Guilty to One Charge, Denies Two Others < Previous
Hilarious Meme Compilation (Friday July 20) Next >
Recommended stories you may like: