Waititu: Deputy Governor Nyoro is a Liar Who Skips Meetings 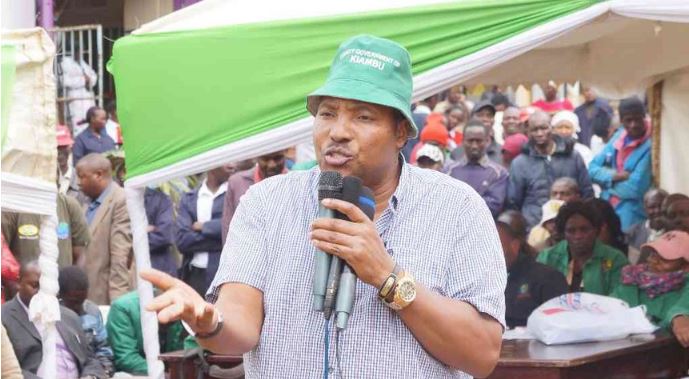 Kiambu County Governor Ferdinand Waititu has brushed off Deputy James Nyoro’s claims that his boss is running the county all by himself.

Speaking during a function to mark World Environment Day on Tuesday, the self-proclaimed Baba Yao further denied claims that he has sidelined Nyoro in decision making.

Waititu accused his deputy of lying and skipping cabinet meetings without reason. He claimed that Nyoro’s remark on lack of offices was a “political lie” and that he has two in Kiambu and Thika.

“The one is Kiambu is undergoing rehabilitation,” said Waititu.

“Saying he doesn’t have an office is a broad daylight lie. There are enough offices. You cannot come to push me in my office. You have to serve in the office you were elected to be in.”

Baba Yao further claimed that Nyoro wanted a new vehicle yet the ones acquired from Kabogo’s government were still in good shape.

“I am still using the one handed to me by my predecessor William Kabogo. The problem with our people is that they want new vehicles which are very expensive.”

“If someone stays away without a good reason, we cannot stop serving residents and wait for him,” he said.

“How many people did I invite here? All of you came willingly. There are officers from our government you cannot see here. No one chased, sidelined or failed to invite them.”

Nyoro had claimed that he had gone through “torture and hell” at the hands of Waititu.