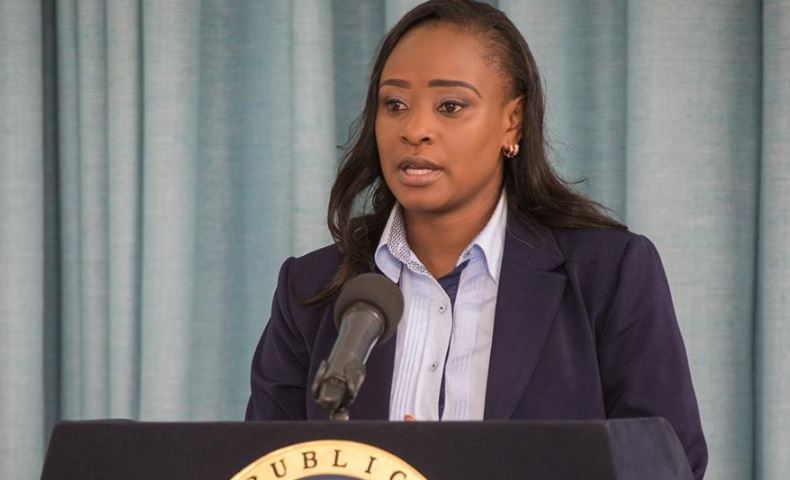 Kenyans on Wednesday finally got to see Kanze Dena in action following her highly publicised and celebrated appointment as deputy State House spokesperson.

Backed by her years of experience in broadcast journalism, Kanze held her nerve on her new podium and introduced the brief in Swahili.

She addressed the Sh3.0 trillion 2018/2019 budget presented last week saying it is not oppressive to the ordinary citizens. She said the budget is pro-poor and aims at helping the government achieve its plans on the big four agenda.

In regards to the war on corruption, Kanze Dena maintained that President Uhuru Kenyatta’s is dedicated to ensuring the vice is eliminated.

She said all constitutional agencies mandated to fight corruption have been directed to move swiftly and ensure all culprits are brought to book.

“The president is a front liner to the war against graft. As he directed a lifestyle audit of all public servants it remains just like that until the vice is eliminated,” she said.

Kenyans who were following the briefing took to social media platforms to comment on Kanze’s maiden address. While a majority were impressed, another section chose to shoot the messenger.

Some sampled reactions below.

Why are people congratulating @KanzeDena for lying again? What the fuck is wrong with us Kenyans #StateHouseBriefing

Mwana wefwe lied her pant suit off but her voice was sweet and angelic, so I listened #StateHouseBriefing https://t.co/HZS1ifAF2X

Yes she has the Job, she is always be aka good girl but the Lies that comes with that job will cost her character #StateHouseBriefing

To the peeps on my neck over @KanzeDena , be guided accordingly that she is now a public officer not insulated from accountability. I won’t allow her get away with intellectual dishonesty in the name of PR #StateHouseBriefing

There is no force more powerful than a woman who is determined to rise.. #KanzeInauguralBriefing #StateHouseBriefing

Our beloved Kanze taking it on. Go girl! #StateHouseBriefing

Kanze donning designer suits but lying openly to all Kenyans. No amount of cosmetic appearance will change the fact that Jubilee administration is a kleptocracy. #StateHouseBriefing

Working for government can transform. The humble @KanzeDena has begun her new job by repeating the lies we’ve been hearing the last six years.#StateHouseBriefing

Dear @KanzeDena you have been recruited into this PR. Last I checked , sisters of @UKenyatta were placed in a special list of disable and awarded @MOH_Kenya tenders. #StateHouseBriefing https://t.co/kRety68EQu

Jobless slay queens here clapping for the PR Kanze Dena is doing. Clapping for “tunataka kubuni kazi kwa vijana”. Have you forgotten the number of times your CV has been rejected by your government & private sector?

@KanzeDena should have stayed at @citizentvkenya instead of taking a job that involves lying to people!#StateHouseBriefing

Watching #StateHouseBriefing and I must say our journalist need to learn Kiswahili language to match Madam @KanzeDena‘s fluency in speaking.
cc: @paulinenjoroge

Instead of highlighting relevant issues affecting kenyans, the new Jubilee PR guru is busy entrenching the jubilee lies. @KanzeDena go back to citizen while u still can #StateHouseBriefing

Deputy spokesperson of state house Kanze Dena. You are an inspiration to us.#StateHouseBriefing pic.twitter.com/BNiUcmGOkx

#StateHouseBriefing What’s all the fuss about a woman addressing the nation! Even Lucy Kibaki went on live TV to ascertain her position as the only 1st lady in Kibaki’s life! ?

The propaganda has began. She talks about creating employment for the youth yet Francis Muthaura whose probably 80yrs old was appointed to KRA. Job opportunities being created are for Octogenarians not the youth. Shame on you Kanze Dena.

For the first time ever I watched the #StateHouseBriefing in fluent swahili and it was so refreshing.
Kanze Dena will do a good job

This was a brilliant move by @UKenyatta to have @KanzeDena elevated to such position.The lady is just brilliant #KanzeInauguralBriefing #StateHouseBriefing

Good News For Nairobi Residents as Ndakaini Dam Hits 90% Capacity < Previous
Only in Kenya: Chebukati ‘Flies Abroad With Chiloba’s Office Keys’ Next >
Recommended stories you may like: