Why I Interrupted DP Ruto During His Speech, Baringo Woman Explains

A young woman who disrupted Deputy President William Ruto as he addressed residents of Baringo on Saturday blamed poverty for her actions.

Michelle Chepkoech, a mother of five, caused a scene when she marched through a thick crowd to grab Ruto’s attention. The DP had been reading his speech when Chepkoech, accompanied by two of her children, approached the podium and shouted “Mheshimiwa Ruto”.

Efforts by the DP’s security team to block her proved futile as she shouted louder, forcing Ruto to stop his speech.

Ruto then asked his security detail to allow the woman to access the dais and told her to wait for him to finish his speech. 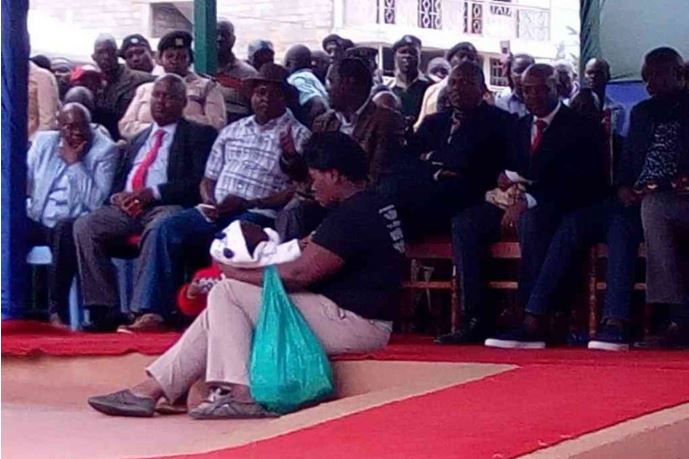 Speaking to journalists, Ms Chepkoech said she was from Sesya in Baringo Central sub-county but was living in Eldama-Ravine town where she was jobless.

She disclosed that she had shared her plight with several leaders but help wasn’t forthcoming.

“I have told so many people, including leaders, about my problem but they have not helped me. I just wanted the DP to buy me and my children a small piece of land,” she said.

Ruto later gave her an appointment to meet him at his office in Nairobi.

The DP was in the county to launch Eldama-Ravine Technical Institute, Makutano-Ravine road and Skyline Sacco Plaza, as well as preside over a fundraising for needy students in Elama Ravine.

He was crowned an elder by the Tugen Council and promised full support for the presidency come 2022.