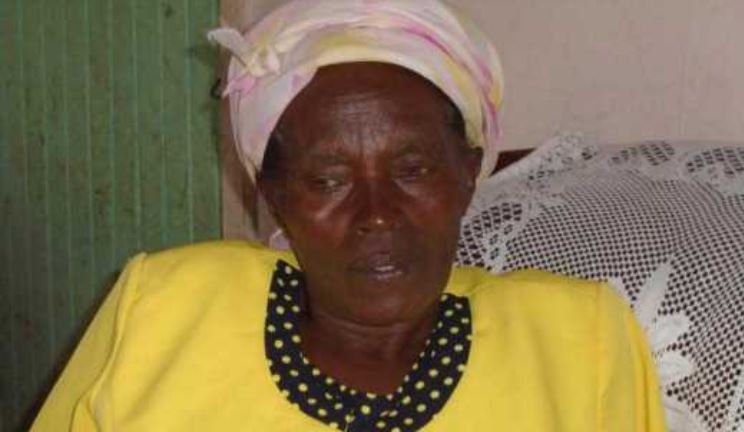 A woman whose surprise encounter with President Kenyatta during a memorial service for the victims of the Solai dam tragedy made national news, has finally opened up about the incident.

Esther Muthoni, 65, a member of the PCEA Women’s Guild, had a seat reserved for her in a strategic position, as they played an active role during the service.

“I had arrived late shortly after President Kenyatta and I sat among other members of the Women’s Guild. I knew the President was in attendance, but I didn’t know exactly where he was seated,” said Muthoni.

Muthoni was one of the members of the Women’s Guild tasked with collecting offerings. Her encounter with the president happened as she walked back to her seat after she had handed over her basket to the preacher at the podium.

“I happened to be the only one using a different path after handing over the offerings. A well-built man stood up and held my right hand. As he led me towards my seat another man held my left hand, making me feel uneasy,” recounted Muthoni.

After turning around and realising that the man who had made her uneasy was the Head of State, Muthoni could not believe her eyes.

“At first I thought this was just a dream, but when we looked at each other in the eye, I was elated, but fear soon gripped me. I became confused not knowing whether to move on or go back and use a different path,” she recalled.

It was at that point that Muthoni became a meme after she was captured by cameras with her mouth wide open.

She then buried her face in her palms and walked away in utter shock.

According to Muthoni, she was unable to speak during the service and felt guilty for what she says was a breach of protocol, as she had worked in Government offices in her youth.

“Flashbacks of the brief moment I had with the President kept coming throughout the service. I was unable to speak to anyone, including my daughter who was seated next to me, during the service. My conscience told me that I had done a terrible mistake,” she said.

Since the incident, Muthoni’s phone has not stopped ringing as friends keep calling to congratulate her.

But Muthoni still feels guilty and wants to apologise to the President and have an opportunity to properly shake his hand.

“Despite all the congratulatory messages I have been receiving, I still feel guilty. I feel I need to tender my apology to him through a proper encounter. I welcome him to have chicken for lunch when he comes to issue title deeds that he promised,” said Muthoni.

All The Trending Pics in Nairobi Today < Previous
PHOTO – Suspicious “Bomb” That Sent Thika Town Residents into Panic Next >
Recommended stories you may like: