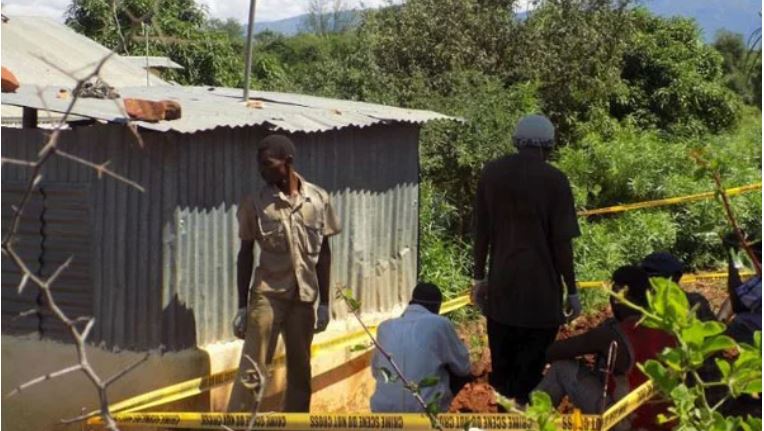 Forensic pathologists have unearthed human bones at the home of a GSU officer who is accused of killing his girlfriend and their son.

The human remains were exhumed from a shallow grave in Njarane village, Embu County on Wednesday. Dr Amritpal Kalsi said the bones were exhumed about three metres from a toilet in the compound of the police officer.

Kalsi, who conducted the exhumation with assistance from police officers, could not confirm whether the remains were those of Ms Pauline Kagendo, 19, and her son Johnson Muriithi.

Also present during the exhumation was Kagendo’s father, Mr Stanley Mugendi, who said the recovery of the bones gave them hope of establishing the truth.

The deceased’s family had claimed they had information that the officer, Mr Edwin Mwenda, killed the two and dumped their bodies inside a pit latrine in his home.

Mbeere North police boss Jane Sang said the discovery had breathed life into their case and they are only waiting for a report to see if to charge the policeman with murder.

Ms Kagendo and her son disappeared after they were allegedly lured by the police officer on June 10, last year.

On the said day, Kagendo is said to have left with her son for the officer’s home after the boy fell sick but they were never seen again.

Kagendo’s mother, Ms Onorata Kanini, said the police officer had openly expressed irritation over her daughter’s calls every time their son was unwell.