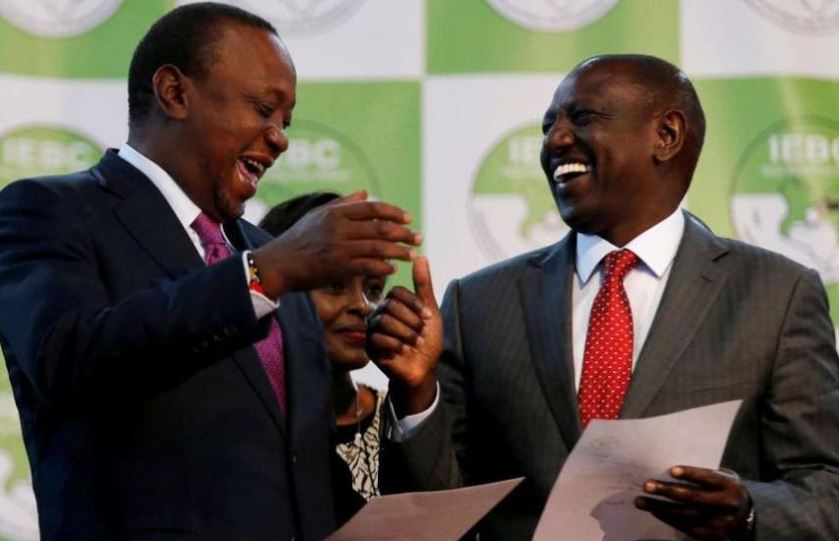 The views expressed below are personal and do not reflect the views of nairobiwire.com

Dear Kenyans, some of us are exceedingly getting irritated and angry at the absurd levels of political ignorance & naivety that a significant section of the general public including the media is displaying.

The Jubilee regime is a CARTEL CONTROLLED OUTFIT.

It is an ethnic controlled bandit outfit that poses as a “Government”, it is funded by cartels, it is run by cartels and its very survival depends on these cartels.

– Uhuru Kenyatta, being part of one of Kenya’s biggest cartel families, is part of the cartels.
– Uhuru’s next of kin/relatives including – (wife, sister, brother, mother, cousins, uncles) are all part of the cartels that are chocking this country’s economy to death.
– Uhuru’s ‘advisers’, cronies, political allies, social friends, family friends are part of the cartels.
– William Ruto is one of the major cartels in Kenya.
– William Ruto’s allies, cronies, foot soldiers, business associates, social friends are part of the cartels.
The Mount Kenya Oligarchs that fund Uhuru Kenyatta’s–now often–sham elections are some of the major cartels in the country.
Cabinet Ministers, secretaries, and other state-appointed agencies all form part of this viscous cartel syndicate.
The people arrested or supposed to be arrested are small fish, the big fishes, the masterminds always go scot-free, have you solved the problem by arresting the small pawns and leaving the masterminds to plot their next moves?

The JUBILEE regime is basically just a HUGE CARTEL SYNDICATE run by wealthy Kikuyu and Kalenjin thugs posing as a Government and pretending to be carrying out the constitutional mandates required of a genuine Government, same case applied to Kibaki’s/Moi’s/Jomo’s thieving outfits, however, former bandit outfits did a lot less damage to our economy compared to Uhuru’s Cartel Juggernaut as everyone can clearly see or feel.
You don’t do the same thing over and over expecting different results – that is the epitome of insanity in it’s purest form.

Revolutions start with MENTAL AWARENESS, get to know how your political system actually works or operates, then by that, the general populace can actually form more cogent strategies and tactics on how best to BRING THE ENTIRE SYSTEM DOWN so that we can start afresh.

The other thing is, I personally encourage Kenyans to be more SKEPTICAL and CRITICAL when analysis politics or when forming political judgments. This should be STRICTLY BUSINESS, look at Kenya as your own company, how would you want your company to be run? how would you deal with incompetent employees? how would you solve inefficiencies, cases of theft, lack of growth? stagnation…etc?

Don’t ever make the mistake of analyzing politics EMOTIONALLY, keep your emotions aside, use reason, logic, facts, critical thought, skepticism, objectivity and most of all, be intellectually honest with yourself.

Having said all that, the onus is on you Kenyans, educate and inform yourselves, know your systems then let’s continue resisting and exposing this system, it’s our fight, it takes time, no one said revolutions are easy, Burkina Faso keeps on doing it, KENYA CAN DO IT. We are known to be some of the most active and suave social media users in the world, some of the best in Africa, let us use this strong tool for political awareness folks and we will eventually triumph!!

The Trending Pics on Twitter This Tuesday < Previous
Unethical People Won’t Be Tolerated, President Kenyatta on Corruption Next >
Recommended stories you may like: