Kenyan fashionista Carol Odero has stood her ground on her controversial fashion opinion about Meghan Markle’s dress and makeup.

The Citizen TV ‘Fashion Watch’ panelist, during a special edition of the programme last Saturday, was of the opinion that Markle’s dress was too simple for a princess.

She also took aim at her makeup saying it was “not outstanding”. 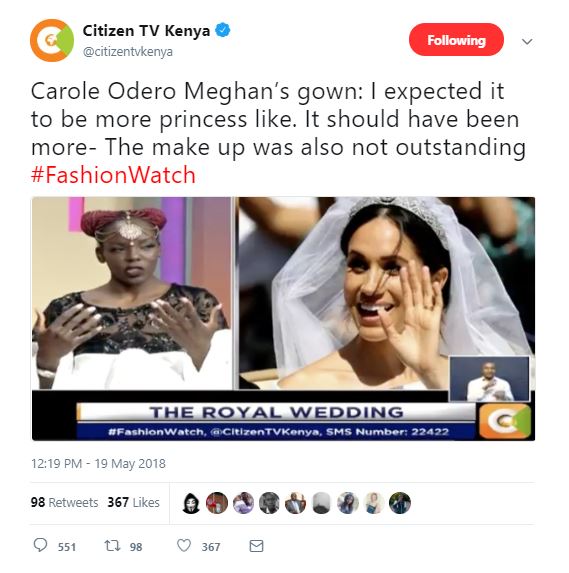 This drew a heated uproar from Twitter users who questioned her fashion credentials.

She noted that those attacking her had taken her comments out of context adding that anyone who watched the whole interview would understand where she was coming from.

Carol noted that having been an avid reader of Meghan’s Lifestyle blog – The Tig – her expectations were definitely over the rooftop.

“I used to read The Tig before her prince arrived…so definitely my expectations may have been too high.

“But let’s remember Meghan herself once said ‘For work, I get so dolled up that it’s nice to wear boyfriend jeans and a sweater'” she said.

The journalist avoided further questions on the matter saying that she does not want to give the story life.

The Managing Editor of Couture Africa magazine wished Meghan and Prince Harry love and laughter in their marriage.

Size 8 Advises Kenyan Women on How to Deal With Husband-Snatching Friends < Previous
Daddy Owen To Be a Dad as Wife is Treated to Sumptuous Baby Shower [PHOTOS] Next >
Recommended stories you may like: