Kirinyaga Deputy Governor Peter Ndambiri has spoken out for the first time since an explicit video of himself and a woman leaked online.

Speaking on Wednesday, a day after the video went viral, Ndambiri denied that he was involved in an illicit affair. He said he was set up by extortionists who forced him to strip at gunpoint in order to portray him as an adulterer caught in the act.

“There is a group of gangsters targeting politicians and individuals they think have money in this country. The purpose of these gangsters is extortion and I am such a victim,” said Ndambiri.

“I was set up by crooks who took me through a very agonizing moment and right now what matters to me most is about my family and the people of Kirinyaga who look unto me for guidance and leadership.”

He spoke in Thika where the incident caught in the video is said to have happened.

Ndambiri claimed the incident happened last weekend when he was accosted by gangsters who forced him into a room with the said woman. He said the conmen then forced them to strip naked as they recorded the incident to show that he had been busted sleeping with a married woman.

“This is an episode that has brought a lot of shame but it has happened when people fall victims to gangsters. Anyone can fall victim and find themselves in a situation for purposes of extortion. I thank God that I am alive because these gangsters would have either killed me if I failed to comply to their demands. For me to save my neck I had to comply,” stated the Deputy Governor.

In the video, the deputy governor and the woman are both seated on a bed naked while being grilled by an unknown number of men in a room. 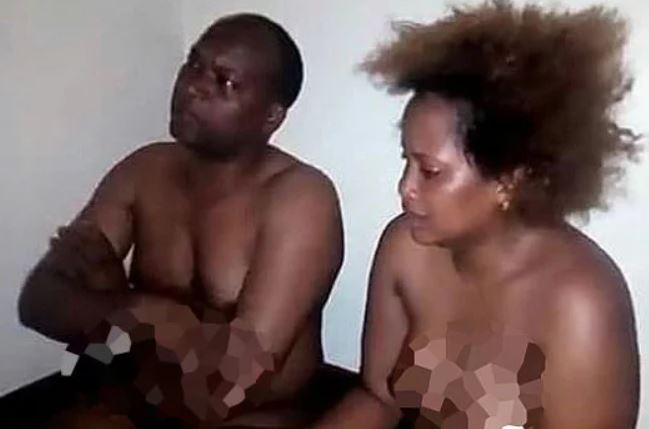 The men can be heard ordering the deputy governor to identify himself. He then identifies himself as Ndambiri Njagi, a businessman.

Under a rain of slaps, he is forced to admit that he is the Kirinyaga deputy governor, as the lady tries to cover her nudity.

He eventually confesses to having an affair with the woman and says that he did not know she was married.

Ndambiri also says that he had planned to visit the woman’s parents for dowry talks and apologizes to her supposed husband.

“I want to tell that man that I’m very sorry. I did not know she is married, I was even planning to meet her family,” he says.

The incident caused a social media storm with a section of online users calling for Ndambiri’s resignation.

All The Trending Images in Nairobi This Thursday < Previous
GRAPHIC: Kenyan Doctors Perform Successful Foot Re-Implantation Surgery Next >
Recommended stories you may like: