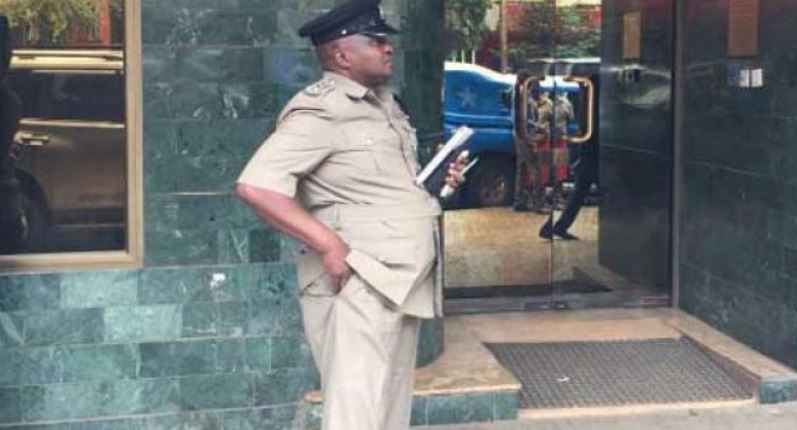 An unknown number of robbers over the weekend broke into Habib Bank AG Zurich, Koinange Branch, and made away with millions of shillings.

The robbers reportedly entered the bank through the rear door, went into the second floor of the building and disabled the alarm and the CCTV surveillance cameras before getting into the banking area.

They are said to have used gas cylinders to break into safes and made away with an unknown amount of money.

Confirming the Sunday night incident, Nairobi County Commander Joseph Ole Tito said the robbers used papers to block the bank’s tinted glass windows so that security guards could not see what was happening.

The robbers even had time to eat supper inside the banking hall.

“They took their time because we have found food leftovers meaning they even had the time to eat inside the bank. They have really done a lot of destruction inside there, but they did not manage to get into the strong room,” Tito said.

The leftovers were found in disposable plates on the counters and floors and included githeri, beef, chicken, rice and chips.

Tito said they suspected that the robbery was staged by people familiar with the bank.

“This must be an inside job, by people who knew how to access the bank through the rear gate, the location of the CCTV cameras, the alarm, the safes and the strong room,”

The strong room contained Sh41 million which was still intact by the time detectives opened it on Monday morning.

Some employees who arrived for work were interrogated by the detectives as investigations continue. Authorities have also recovered gas cylinders and other breaking in materials at the scene.

The incident comes in the wake of increased bank robberies in Nairobi and environs.

Hilarious Meme Compilation (Tuesday March 1 < Previous
All The Trending Images This Tuesday Next >
Recommended stories you may like: