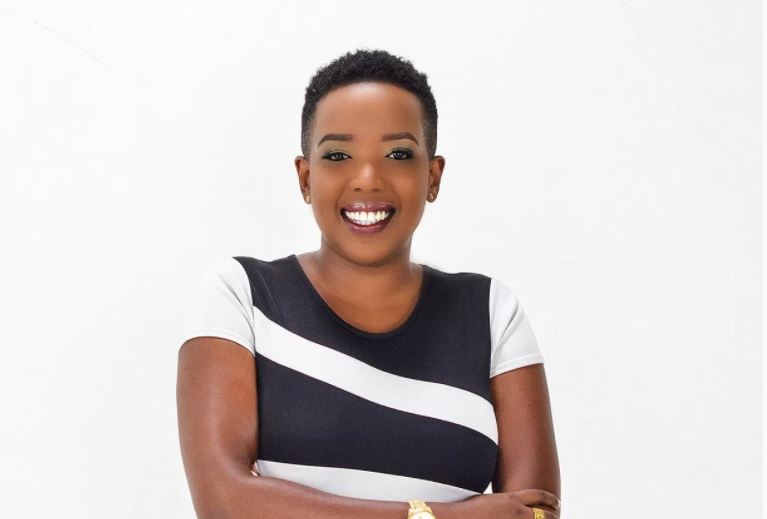 Media personality Kirigo Ng’arua, one of the “casualties” of a highly publicized retrenchment by Royal Media Services, has opened up about the shock sack.

In an interview with freelance journalist Yvonne Aoll, Kirigo disclosed that she was given the sack minutes before going on air. And while she had expected the sack, Kirigo revealed that she was still shocked.

She also opened up about her close friendship with the late Fidel Odinga, whom she talked with just a day before he passed away.

“I spoke to Fidel the day before he passed away. We were supposed to meet up that day. I was at the Artcaffe in Junction, and he asked me to meet him at the Artcaffe in Westlands, and I thought, I can’t leave one Artcaffe to go to the next one, that would be ridiculous. So we put the meet-up off and planned for a later date. And then, he died.”

Kirigo, who now plies her trade online with The Girlfriend’s Table, her own online space where women come together and have serious conversations, further talked about a media return, reports of dating Resolution Health’s founder Peter Nduati, and more.

Below are some excerpts:

Where were you, Kirigo, when you received the news that Citizen TV had let you go?

I was in the office, I was actually preparing for the 1.00pm news. It was around 12.30pm, and I was literally the second person on the list to be called in.

What was your immediate reaction?

The bosses told me and I just said, “Okay.”

Yes, okay. There was talk it was going to happen, and so a part of me expected it. There was definitely some shock that it actually did happen, but I just accepted it.

I was going to, I was planning to. But then the bosses asked me not to.

Who did you call first to share the news with?

I think it was my brother. He’s very easy, I gave him the news, he received it, and that was it. I think my next phone call was to my father.

Did you ask yourself, “Why me?”

I did, and I think I have the answer to this now. (Pauses, and looks into the distance) I think the summary of it is that my time at Citizen was up.

I think a part of me had known it for a while, and the bosses had been kind enough to offer me different opportunities, so I stayed. But in the end, I just wasn’t really happy, and they could tell. But we tried.

Did you always want to be on TV?

No. I had never sat down and thought, “I want to be on TV, and this is my plan, this is how I’ll do it.” It had never been a keen interest of mine.

How then, did you end up on television?

I was 23 when I started out at radio Hot 96, which is also owned by Royal Media Services.

Then one day, one of my colleagues was impressed by my sports knowledge, and thought I could join the Sports Desk as a sports news anchor. But after doing the screen test, our boss, Farida Karoney, said I’d do better in General News. That was it.

When the list of people who had been let go leaked online, how did you deal with it?

It was intense, as you would imagine, because the entire ordeal came with a bad connotation, that we’d been fired. But we weren’t fired, we were laid off. There’s a difference.

Here, it was just a situation where the company is restructuring, they don’t see how you’ll fit in anymore, and they release you. It’s not that we were bad people, or our services were poor, or we didn’t deliver. None of that existed.

But I embraced it all, even when the public found out, I didn’t shy away from it, I just embraced it and owned it.

The period right after you found out your job was gone, was it a dark season for you?

I wouldn’t call it “dark.” Dark is a bit too heavy, I’d call it a confusing state, it’s like, here we are, what do we do? Where do we go? What next?

I travelled. I knew some people who lived in Ghana, and they invited me over. I’d never been to Ghana before, and I thought, why not?

To get away from everything that was happening and all the talk that was going on, travelling turned out to be exactly what I needed.

Who held you during that period, as you tried to come to terms with everything and find yourself again?

Have I found myself? (Laughs)

I’m lucky and blessed for having a very solid support system: my folks, my brother, my cousins, with them surrounding me, I was in good hands.

I think what also really helped is that I treated my job like any other. I always compared the job of a journalist to that of a bank teller, always attending to masses of people, they know you, but you don’t really know them.

Speaking of journalists, we’ve been seeing quite a number of them leave the media and almost not survive while away from it, why is this?

Numerous reasons and one of the reasons is that the public makes gods of us.

We are idolised, and put on pedestals, and once you leave, people start asking questions,  “Where did you go? Why don’t we see you anymore? When are you coming back on TV?”

We are human, and like everyone else, we are just trying to navigate life the best way we know how.

Do you think, for some of the news anchors or media personalities, it is a case of pride coming before a fall?

(Nods) Definitely. That’s certainly the case for some. Because while on the job, the fame, and the attention and the compliments can get to your head.

You start having airs, living beyond your means, become a snob, it’s terrible.  But, hopefully, we can learn from all those who’ve gone before us and do better.

It is also always important to have perspective. Do you remember what Bitange Ndemo said?

About people not calling him anymore, as soon as he left government?

Precisely. You have to realise, that sometimes people just call you because you serve a particular need, not that they are your friends per se.

It’s not that my phone used to ring that much while I was in the media anyway, but still, it’s better not to let occupations and opportunities and popularity get to your head.

It can mess you up, and sometimes, it can be very difficult to find your footing again.

Do you think you’re a snob?

I’ve been called that before. But I don’t quite understand it, who is a snob?

Perhaps someone who is aloof?

Aloof. Hmm. Interesting description.  I don’t think I am, but look, if there’s anything life in the media industry has taught me, it’s that you can’t pay attention to what every single person thinks of you.

Has your immediate family fully come to terms with your career in the media coming to  a stop?

Maybe I need to sit down with them one of these days and ask them. (Pauses again) I don’t know.

Have you gone back to the Citizen TV offices since leaving?

I have. A number of times actually. I get there, we tease each other with some of my former colleagues, and have a good laugh.

So, no bad blood?

None. Just the other day, I was passing my congratulatory messages to Farida Karoney for being nominated as the Lands cabinet secretary. She texted back, we laughed about something else, then talked about other things. Don’t burn bridges if you don’t have to.

Will you return to the media?

Maybe. I mean, if the right opportunity came along, I don’t see why not.

During this entire period, were there people you thought would come through for you but didn’t?

Oh, Yvonne, the answer to that question has layers. (Laughs) First, I’m a loner, I like my space too much and I don’t surround myself with too many people.

I’m also very perceptive, and even though some people pretend well, I take my time, and I always have a good read on them. As a result, I don’t surround myself with people who will screw me over. They won’t even have that opportunity.

I read somewhere that you would forgive a partner who cheated on you; is this true?

And a perennial cheat?

I would forgive someone who cheats once, based on the premise that we are all human and we all make mistakes. But someone who cheats over and over? No, that’s something else altogether. There would be deeper issues there to work on than just the cheating.

There was that rumour, that you dated, and had been dumped, by Resolution Health’s founder, CEO, and entrepreneur extraordinaire, Peter Nduati; any truth to the story, or just baseless talk?

(Laughs heartily) I get it. You have to ask even the uncomfortable questions.

I don’t. I just ask questions.

Who would make an ideal partner for you?

But with such different personalities between you two, wouldn’t they exhaust you?

No, they would know how to handle me, that’s what would make it work.

For people who are dealing with societal pressure to get married or have children, even when they don’t want to or are not ready, what’s your advice to them?

There are so many people who lead miserable lives because of “society.” Forget society, do your own thing.

Earlier, you confidently mentioned that you’re a loner, any words of wisdom to introverts who want to take adventures, try new places, but feel the peer pressure to always be in crowds?

Looking back at your media career and or life in general, is there anything you wish you did differently?

(Pauses) I wish I was more aggressive. I used to work, do a very good job, and then just let it be, and hope that the bosses, or the audience, or other people would notice.

Now, I’ve learnt that I need to be more aggressive, to own the good work that I do, to be proud of it and to speak of it. I wish I was more aggressive earlier.

For someone in their 20s, who is trying to learn, but is having a tough time letting go, of friendships, relationships, or even jobs, what would you tell them?

Just let go.  I’m trying to imagine if I’d let go of the job  when I first thought I should, none of this would have happened. There wouldn’t be all this publicity on the issue, and talks of being fired and all that. I would have saved myself a great deal of headache.

Also, listen to your gut. Your gut is always right! It will tell you when something is off. When it comes to people, you’re allowed to give them up to three chances, but them treating you poorly cannot be a common occurrence. Let go. Just let go.

What’s that Oprah said, “When people show you who they are, believe them…the first time!”

Oh, if only we could! (Laughs) I don’t know about the first time, but yes, I totally get what she meant. Don’t give people too many chances, you shouldn’t have to.

Kirigo, are you okay?

I am. (Smiles) I’m more than okay. Even with life’s ups and downs, I’ll be okay.

Funny Posts by Kenyans on Social Media to Take Away Those Monday Blues < Previous
Five Financial Principles For Youthful Entrepreneurs By Women Enterprise Fund CEO S.T Wainaina Next >
Recommended stories you may like: