All You Need to Know About Churchill Show Comedian Duncan ‘Wambilianga’ 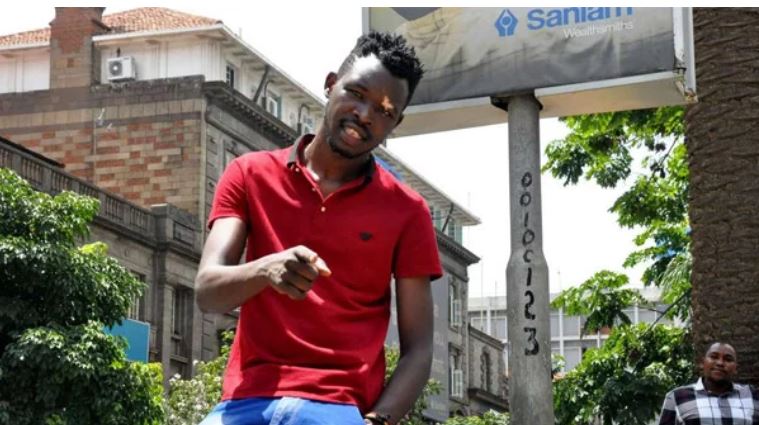 Whenever he steps on the stage, Churchill Show comedian Duncan Kipkemei Kirwa is a sure bet to crack up his audience.

In just five months, Duncan, 25, who portrays a witty story-telling character Wambilianga, has cemented his place on the comedy show due to his unique style.

With the increasing fame that he seems to be amassing every single day, people have been asking more about the funny man.

He spoke to Buzz and here’s all you need to know.

First things first, how did you end up on the Churchill Show?

It was in August 2017 when Churchill and his team were touring different regions in the country to identify fresh comic talent. I heard of the auditions planned for Eldoret and my friends encouraged me to try. When I got to the auditions on the set date, I found about 100 others ready to fight it out; that made me nervous. But I chose to do my thing as I had prepared to do and when my time came, I cracked up the judges. They loved my sense of humor and when I was picked they recommended me to join the main live recording team that I have remained a part of to date.

Your stage name, Wambilianga, how did it come about?

I started by using my real name, Duncan, on stage. However, it got to a point when I felt I needed to a have a name that identified with the character I portray and Wambilianga was the immediate name that crossed my mind. I find the name to be funny and that’s how I stuck with it.

Your tagline on stage,  ‘Waaaaah’ has become very popular with the crowd and fellow comedians, is it for the show or is it part of your normal way of talking?

Honestly, I never thought it would turn out to be humorous but I guess it did because of the manner in which I pronounce it and before I knew it everybody had noticed. However, I often use it to transition from one joke to another. I am glad it did add some flavour to my style.

You’re from the Rift Valley region but your comic style is heavily borrowed from the Western region?

I know right? My work is to make people laugh and in so doing, I have to look for content that befits my character Wambilianga. Besides, I can comfortably do several accents –  Nigerian, Luhya and coastal. Sometimes my jokes depend on the mood of the day.

How hard is it to make people laugh?

I really don’t know because in most instances whenever I open my mouth people just burst into laughter even when I am not trying to make them. I think am naturally funny, just like Eric Omondi whom the other day posted a picture enjoying a holiday with his girlfriend but the public saw something else and made fun out of it (laughs)!

On a normal day, how do you prepare for a show?

I have a team that I work with headed by my scriptwriter Joyrider with whom I write the jokes. We rehearse them and polish up where necessary. After that, I present it to the Churchill team during the auditions on Tuesday, Wednesday or Thursday who will go over them for approval and if a joke meets the standards I get booked for the live recording show.

Have you ever offended someone with your jokes?

Yes, I have. It has happened several times but not intentionally. One occasion that I remember is when I was cracking a joke about fat people when suddenly a woman in the midst of the crowd stood up and demanded an apology. However, I was lucky as the rest of the audience ganged up and cooled her by asking her to understand that it was a comedy show.

Has being on the Churchill Show changed your life?

Tremendously. Because through that platform I was able to land a job as a radio presenter with Mediamaxx’s Emo FM that broadcasts in Kalenjin. I have also been able to get gigs as an MC and currently, I’m preparing for my USA tour in the next few weeks. It has been a blessing to me.

Has the newfound fame affected you?

Not at all, I’m still the guy next door just doing my usual stuff. It’s just a status, nothing much.

How do you handle the pressure especially from female fans?

I am a family man, got married sometime back, that has at least helped to keep me in check and grounded.

Has it been easy for your wife handling her husbands’ new celebrity status?

At first, it wasn’t easy for her because I got married before fame. We would argue a lot more so when we had shows that required me to travel for a couple of days but over time she got used to it and we have been good.

What is it that you miss before you became famous?

Hahaha! So much stuff but the main one is that I can no longer go to the local pubs and enjoy my pocket-friendly beer ‘Keg’ because paparazzi are always on the lookout and ready to blog with negative stories.

For how long do you plan to keep doing comedy?

As you know comedy has no pension plan and I can’t do this forever. That’s why I have started venturing into various businesses as a contingency plan.

CRAZY! These are the Funny Pics Going Viral on Social Media < Previous
Hilarious Meme Compilation (Monday February 12) Next >
Recommended stories you may like: