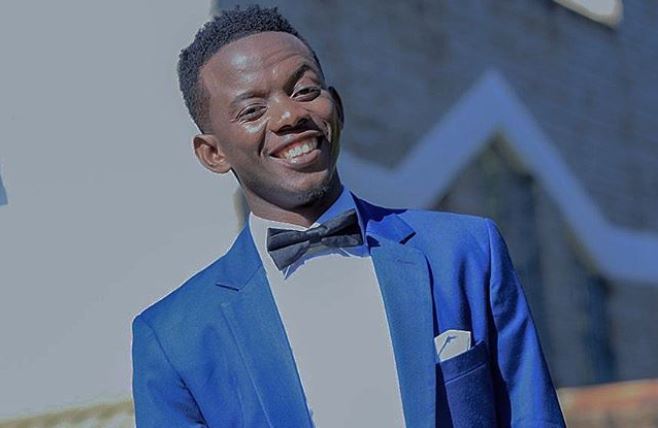 He is best known as David Wonder but his government name is David Junior Odera. Nurtured by Award-winning singer Bahati two years ago, David Wonder is the freshest sensation on the local gospel music scene.

The hitmaker has four songs under his belt, including “Ndogo Ndogo” with his mentor and boss Bahati.

David Wonder spoke to Buzz about his turbulent journey and how Bahati helped shape the musician he is now.

“The name Wonder came into being when I met Bahati. When I narrated my struggles as a budding musician to him, his remark was ‘You are a product of God’s wonders’. It was as easy as that.

My start was as turbulent as they come. After completing high school, I set out to pursue music as a career. But at the same time, I was struggling with extreme low self-esteem. Later, my friends and I formed a boy band. We would perform at Our Spirit of Faith Pentecostal church in Baba Dogo and in other small gigs. God purposely put me there to confront my esteem issues. The band disintegrated after a few months.

My dream to pursue a music career hit a dead end when I was sent to my dad’s village in Awendo, Migori County.

I stayed down there for six months, doing practically nothing. When I returned to Nairobi in 2015, I got a job as a beautician at a city salon, working for 14 hours a day all week long. This left me with absolutely no time to advance my music interests. My heart wasn’t in the beauty job, but I hang on out of desperation than enthusiasm. I worked at the salon for six months.

My second stab at music was inspired by a lady friend. We had not been in touch for a long time. So one day she called to enquire about my progress in music. She was disheartened to learn that I had given up on music after failing to make a breakthrough. She promised to link me up with someone from Eastlands Most Beloved (EMB) recording label in Nairobi. Little did I know that the person was Bahati. I was, however, still not enthusiastic about the idea. But she encouraged me to give it a try.

The journey to get in touch with Bahati began in June 2015.

I would call him and send him text messages without any response. I almost gave up after vainly trying to reach him for more than three weeks. Then one day, he answered my call. It was unbelievable. I introduced myself and narrated my story to him with clarity and confidence. He promised to get back to me. After about a month of waiting, Bahati called and asked me to meet him at his EMB studios.

In my flight of fancy, I thought we would record a song right off the bat. That way, I would have jumpstarted my music career. But that was never to be. I underwent a period of intense mentorship for a full year in 2016. I was required to be at the studio every week to record any music idea I had. Bahati would later help me to put the pieces into desirable shapes. Under him, I learned the how to write songs. He also taught me the importance of prayer. Bahati has a very deep understanding of the Bible. He challenged me to study the Bible more closely.

The most fascinating thing about the local gospel music scene is the diversity of our Kenyan music market. A section of the audience fancies gospel reggae, another prefers ragga while others are into different genres. This pushes artists to explore all available styles as they seek to meet the audience’s demands. While diversity is important, we must, however, also seek to find our unique Kenyan sound and style just like the Americans, Nigerians, and Tanzanians.

Humility, patience, and obedience are what made my work relations with Bahati thrive. His initial promise to guide me through my journey in music was by word of mouth. But by keeping me in tow for this long, I later discovered that he was assessing me for these virtues; to evaluate the viability of a possible partnership. Had it just been about recording and releasing a song that would probably have happened during the first few months of our interaction. Instead, he decided to invest in me.

I don’t believe secular music is more popular than gospel music. This is just a perception. Each genre of music has its audience. Young people, however, love the hype that secular music offers. Many years back, gospel music used to outperform secular music. Those days are coming back. A fresh breed of talent has emerged and soon, secular music will be backpedaled. Gospel artists must take the challenge and interrogate why secular music enjoys more airplay locally.

Has secular music corrupted gospel music? I think not. Times are changing very fast and so is music. If you don’t adapt to these dynamics as an artist, you risk losing your audience. Conservative dance styles, for instance, in gospel music have almost been phased out. People now prefer modern and creative styles. It has become a scramble for the audience. Gospel artists are required to package their message in the audience’s most preferred style, sound and beats to remain relevant.

The greatest lesson I have learnt about the music landscape –and any other discipline of life –is that the higher you go up your career ladder, the more humble you should become. Humility opens up doors for you in terms of collaborations and other partnerships that help you grow more. Being approachable also inspires budding artists.

I believe this is not the right time for dating and relationships for me. I wish to solely focus on music first because that is what my record label gave me the opportunity to do. Unlike in the secular music industry where artists capitalise on controversies and relationship scandals to get fans talking, the ministry is a critical area; artists are required to uphold the highest level of integrity. I don’t wish to compromise my gospel mission. So no, I’m not dating.

One curious thing about me is my weak sense of smell. As a result, I don’t wear cologne. Nor do foul smells affect me.

My highlight of 2017 was doing the song Ndogo Ndogo with my boss Bahati. While I didn’t expect the song to go viral within such as short time after its release, it has catapulted my career to greater heights than I had imagined while starting out. I hope for bigger and better fortunes in 2018.

I am not a flash in the pan. God made it possible for me to get my career off to a terrific start. I believe He has bigger delights in store for me. Within two years into my career, I wish to be among the crème de la crème gospel musicians in the region. I hope to be part of the regional gospel music revolution. My desire has always been to invent my own style, which I will adopt throughout my music career.

Other interests outside music include gaming. I’m a big fan of PlayStation (PS). I could spend half a day playing FIFA, racing and on missions without getting bored.”

DJ Sadic: “This is What You’ll Find Me Doing on Sundays” < Previous
Nyashinski: “How My Degree in Environmental Planning Has Helped in My Music” Next >
Recommended stories you may like: