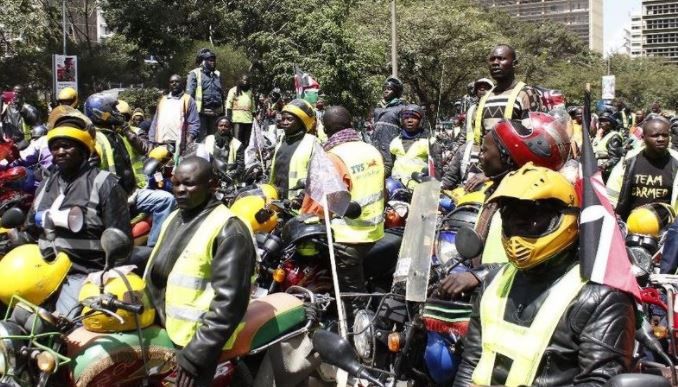 ‘Nairobians’ who access the Nairobi CBD on ‘boda-bodas’ will now be required to find other means following an immediate ban on boda-boda operations in the City Centre.

The Nairobi County Government on Monday announced the ban amid a public outcry over criminal activities in the Central Business District.

It is believed organized criminal gangs operating in the CBD escape on bodabodas after mugging their victims.

The Director of Operations at the City Inspectorate Department, Peter Mbaya, said beginning today( Tuesday, January 23) boda-bodas will not be allowed in the Central Business District.

The director said only motorcycles having carrier boxes or those offering courier services and have branded boxes will be allowed in the city centre.

He added that boda boda operators will be dropping their passengers in areas outside the CBD such as City Stadium and Ngara.

Mbaya further issued a warning to grazers who drive their animals into the city, noting that stern action would be taken against them.

The County is also looking to flush out street children and hawkers who have taken over the city streets as police seek to secure the Central Business District.

“I want to assure everybody that we will do all things possible to nab petty criminals. There will be an anti-mugging squad to work with the county too to curb these vices,” said Nairobi Regional Commissioner Bernard Leparmarai.

What KNH Plans to Do After Public Uproar Over Rape Allegations < Previous
Police Crackdown Nabs 35 Nairobi CBD Muggers as Sonko Forms Anti-mugging Squad Next >
Recommended stories you may like: