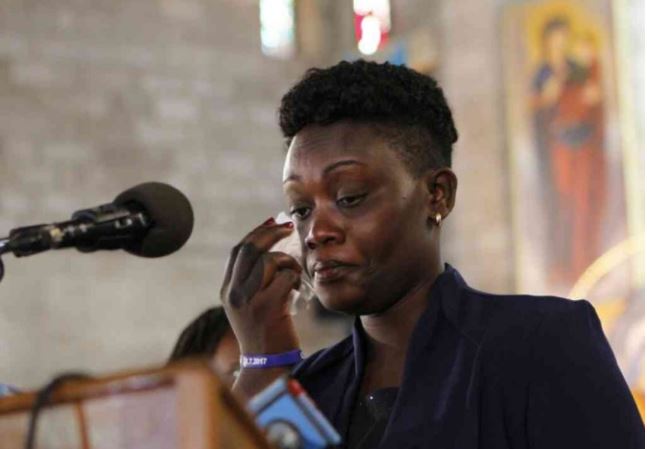 The widow of former IEBC ICT manager Chris Msando on Thursday moved congregants at a solemn requiem mass at the Consolata Shrine in Nairobi.

Eva Elsa Auma Buyu put on a brave face as she paid a glowing tribute to her slain husband.

Narrating her story with the man she spent 12 years with, Ms Buyu described Msando as charming and gentle.

“He was crazy but in a good way. He loved and cherished his family. He took only a single day to woo me to become part of his life,” she continued.

She added that Msando was captivating and had the gift of winning everybody to his side.

“Everybody voted seamlessly for him because of his hard work…no one went manual. His memory will live on in the stories people are telling now.”

Ms Buyu also demanded justice and said the killers of her husband shall know no peace.

“Are you(killers) happy? Because I know you are watching. May you not have peace and vengeance is of the Lord..na Mungu atatupigania,” she declared.

She further asked Kenyans to let “justice be our shield and defender” as the national anthem says.

“Chris’ death will not go in vain..Tumekataa.”

Ms Buyu then led the mourners in singing the hymn ‘In the sweet by and by.’