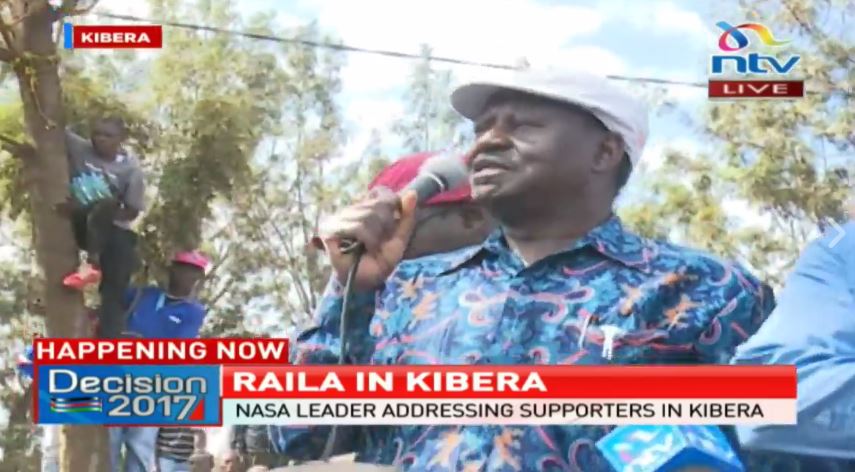 Following a series of violent protests witnessed in Nairobi slums and luoland, Kenyans demanded that Raila comes out and talks to his people.

Yesterday, he heeded this call and led a delegation of Luo politicians to Kibera and Mathare slums. It was thought that he might finally make his concession speech, but he stuck to his character.

A defiant Raila succeeded in adding fuel to the fire, telling his supporters not to relent and await further instructions on Tuesday. He also condemned the police for using live bullets on demonstrators.

Together with James Orengo, Raila repeated the rigging claims and said they will overturn Uhuru’s sham victory.

It did not end there. The opposition leader declared Monday (today) a day of national mourning, and urged Kenyans not to report to work. There were loud cheers from crowd when he mentioned this.

When Orengo took the mic and told the crowd to boycott Nation Media products for bias. He said that only the international media was giving them the coverage they deserve and that Kenyans should immediately cease buying Daily Nation and Sunday Nation.

Orengo had seemingly forgotten that NMG has a TV station, and at this point Raila whispered to his ear to remind him. The Nasa leader then gave an angry look at the NTV microphone right below him.

All the while, NTV was one of only two TV stations covering the event live.

Police Rubbish Raila’s Claims That They Have Killed 100 People and Hidden the Corpses < Previous
Defeated, Desperate and Isolated… Raila is Fighting a Losing Battle and Everyone Knows it Next >
Recommended stories you may like: