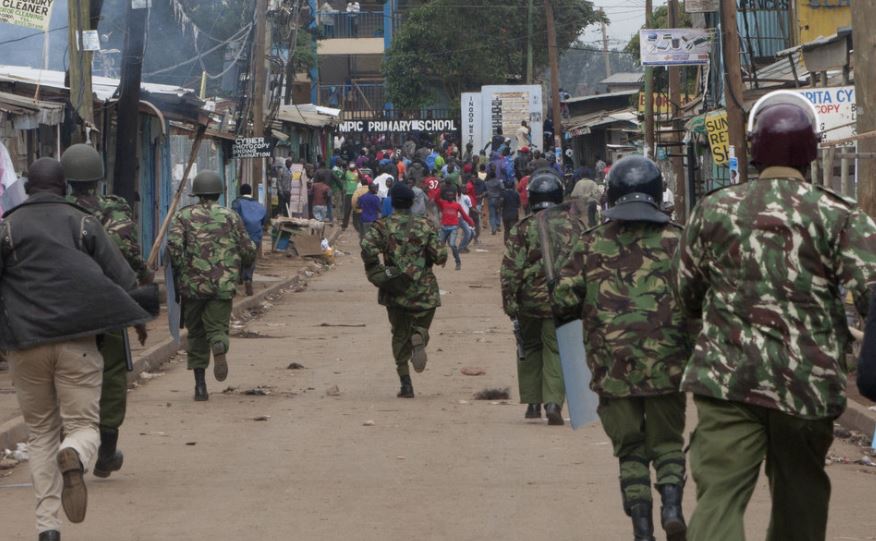 The National Police Service has rubbished statements made by Nasa politicians, among them Raila Odinga that they have been shooting demonstrators and hiding the bodies.

There have been lots of reports of police using live bullets in Kibera, Mathare and Kisumu. If you were to believe social media, you would get the impression that there is a genocide taking place.

Kenya National Commission on Human Rights has on the other hand put the number of those killed by police at 24.

The police have now released a statement stating that they are only responsible for 6 fatalities.

CLARIFICATION ON FALSE ALLEGATIONS AGAINST POLICE.

The National Police Service takes great exception to untruthful allegations made by some NASA politicians to the effect that the Police are responsible for killing 100 persons and hiding the corpses in body bags.

Equally, lacking in truth is the allegation made by the Kenya National Commission on Human Rights that we are responsible for 24 deaths.

These allegations are unfounded and have no basis in fact and are clearly aimed at escalating tensions in the Country.

In the past 2 days, we are aware of six (6) fatalities, in which criminals armed and acting with deadly intent attacked Police officers attempting to effect arrest, resulting in fatal neutralisation of the attackers.

In Nairobi’s, Ruaraka, two (2) criminals were shot dead while breaking into a supermarket at Kasabuni. When challenged to surrender, they attacked the law enforcement officers with machetes with an intent to harm them.

The third one was in Starehe, Nairobi where there was a group of 25 people armed with assorted crude weapons breaking into private houses and who menacingly challenged and charged at Police officers.

The fourth and fifth (2) criminals were fatally neutralised after a gang of six broke into a shop in Kariobangi, Nairobi. As Police pursued them, they fired at the Police officers who fired back in defense.

The sixth fatality occurred in Kisumu when a criminal was shot after a large riotous mob blocked Dago – Kiboswa road and barricaded it with bonfires and stones and attacked motorists and pedestrians. The Police Officers attempting to effect arrest were also attacked.

We are also aware of a very sad and unfortunate incident in which a 9 year old girl was shot dead while in their house in Mathare Area 2, Nairobi by unknown persons.

The other incident brought to our attention is of a dead body found alongside a road with fresh wounds in Nairobi’s Korogocho area.The circumstances of the killing remain unknown.

In the last two incidences, we have instituted investigations with a view to establishing authors of the crimes.

We also inform the public that we are investigating a number of individuals suspected of incitement to violence, either directly or through intemperate social media postings with a view of effecting arrest for prosecution before the courts of law.

Meanwhile, as we continue with our investigations of these individuals, we emphasise the fact that we are open to oversight and we shall hold to account any Police officer found to have breached the law. Needless to restate that we are all equal under the Law.

We warn members of the public that there are photos of dead bodies being attributed to Police action that are fake.

We urge all Kenyans to avoid re-circulating photos that are not verified as real. They are being used to incite & undermine our security.

The police are prepared professionally to protect lives and property from violent rioters. We will keep doing our duty.

We urge members of the public to stand for peace, our work is to serve and defend but all Kenyans have a duty to report the presence of any Police officer who may have breached the law in any way.

Finally, as we stated before the elections, we wish to remind all that we continue to act in strict fidelity to the law,in an impartial and responsive manner and these principles remain valid including post election period.

Funny Posts by Kenyans on Social Media to Take Away your Monday Blues < Previous
Raila Declares Monday a Public Holiday, Tells Kenyans To Boycott Nation Media Next >
Recommended stories you may like: