“We are Still and will Always be Together,” Chameleone Speaks Up on Divorce Rumors 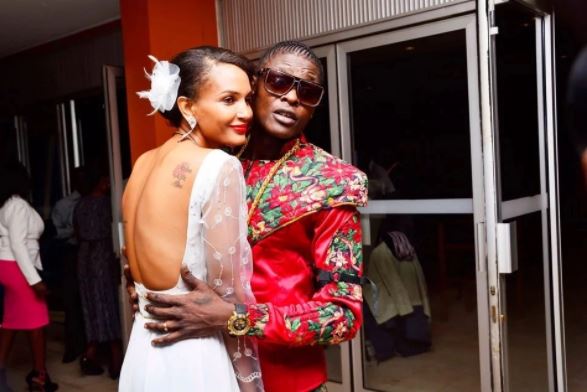 Jose Chameleone and his wife, Daniela Atim, have not gone their separate ways as earlier reported by a section of media outlets.

For the better part of yesterday, word on the street had it that Jose had confirmed the impending divorce through a social media post.

“I am not the man you sought and I apologize for wasting your time.
Thanks, Daniella Atim Mayanja, Mama Abba, Mayanja
I am glad to be single again, I guess you are too.I won’t write, Express or Even Regret every moment we shared.
Will always miss you
I have done enough wrongs than rights.
I will love and keep our Children priority.

But according to the ‘Valu Valu’ hitmaker, the post was made by a friend he had entrusted with passwords to his accounts.

The Ugandan crooner cleared the air in a Facebook post yesterday saying his nine-year marriage is and will always remain intact.

Dr. Jose further apologized to his fans for any damage caused.

“In June I entrusted a friend with my passwords to all my accounts on different Social Media platforms to help me as we promoted the #LEGENDconcert.
They have been running smoothly until early this morning when my Facebook got spammed by malicious person(s).

Yesterday 2nd August 2017, Some ill intended people accessed my Facebook account and page on which they made a very disturbing update post purely intended to not only distract my Family but fans at large.

They tried to damage by portraying that I walked out on my wife Daniella. Which is not true!!!

I after receiving many calls from concerned ones I responded by deleting the post, recovering and securing my page and account. Just like anybody else would do.

On behalf of my Family and fans, I use the same platform to apologise for the damage caused and God willing the one responsible will be put into light.

Contrary to rumor that my wife Daniella and I have parted ways, We are still and will always be together in marriage and most importantly happy even when am away on my Australia tour 2017.”

Adelle Onyango’s Epic Clap Back at Internet Trolls Over her Crooked Teeth < Previous
Babu Owino Pledges Salary to the Underprivileged in Embakasi East Next >
Recommended stories you may like: