Chef Ali: I Personally Know Chef Gordon Ramsey and he is the Sweetest Man Ever 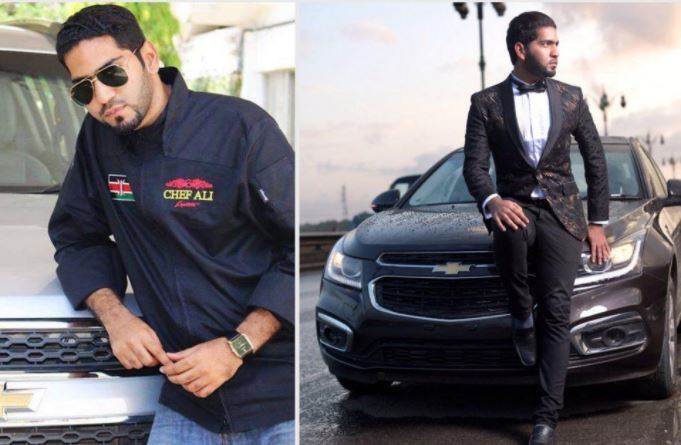 Ali Said Alamin Mandhry or Chef Ali L’artiste as he is popularly known is a TV celebrity chef in the country.

With 13 years in the business, Chef Ali appeared in international TV cookery shows in the Middle East and Culinary conventions in America at a very young age putting Kenya on the map.

He is also the official Chevrolet brand ambassador with General Motors East Africa.

He spoke to Buzz about his career as a chef and life in general.

Chefs are known to be picky with their foods.  They can be really mean in terms of what they want to eat, but I’m the kind of chef who really appreciates food. I respect when people cook, I wouldn’t say I criticize the food but I try to correct because I believe food earns people a living, criticize sounds a bit mean. I’ve done a lot of television shows: Tamu Tamu: Kenyan Cuisine with a Twist, Pilipili Jikoni, Kikwetu Supa Chef where I’ve been mean (in some) but that’s all production, its drama. I love and appreciate food, it’s my life and I believe everyone needs to eat good food.

I’m not as mean as Gordon Ramsey, but again that’s just production. I personally know Chef Ramsey and he is the sweetest man ever, and a good friend of mine. I knew him from social media then met him in the States. He is an amazing person. It’s probably the vibe of the kitchen because it’s a chaotic place; you won’t hear sweet words in the kitchen because it’s always very crazy. There’s a lot of hard work, and cursing and heat and fire are involved so don’t expect to hear ‘hi darling’ in the kitchen. But it’s the lifestyle so you get used to it.

If you are an emotional person it will be difficult to work in the kitchen because sometimes the chef may decide to throw food in your face (Laughs). For example, you’ve prepared food for a guest and he didn’t like it, of course, you will be in trouble with the chef. There’s no one who is perfect but being a chef you have to be a perfectionist so that everything is right from the salt to the seasoning. It’s an amazing job but demanding as well. You have to have passion, love what you do and work hard.

I’m a breakfast guy. I wake up and immediately after my jog I make a mean breakfast for my wife and my two little girls. I cook every day, not just in restaurants and my kitchen but I also do consultations.

I work out a lot, and that’s why I don’t have a pot belly. They say once you get married you get that kitambi but I jog in the mornings. I can’t go to the gym because I have a little back problem, low back pains and all. I walk a lot and I eat healthy, but just a bit because I love food.

Cooking is in my blood. I have been cooking ever since I can remember. My mom used to tell me I would play around in the kitchen a lot when she was cooking. My grandfather also cooked his own food, he was my mentor. I began cooking at a tender age, but at age seven I started cooking with my mom, I have a family that loves and appreciates food, it’s always a feast at our house.

I live in Mombasa and I have a show on Citizen Television, which means I have to come to Nairobi every week. I’m always on the go and most of my work is in Nairobi. My family is in Mombasa and at the end of the day, I’m comfortable there. It’s my home and it’s got a vacation vibe. I come to Nairobi at least four days a week. Nairobi is too chaotic and getting from one place to another is a bit crazy. It’s a bit too much for me but I love working here.

I went to Aga Khan in nursery, primary and part of high school, and I did my KCSE at Sacred Heart High School. I then went to Utalii College where I did food production which by the way is the best institution to do your culinary arts. I’ve done courses abroad too; I did my bachelors in Costa Rica, I’ve traveled doing short courses here and there. There’s no end to learning. I want to pursue my masters and later Ph.D. I started off as a cook and then chef but now I’m more of an influencer and marketer because I represent a lot of products. If I do my masters I will do something along the lines of marketing or public relations.

I’m the official brand ambassador for Chevrolet in East Africa. I call myself the Chevrolet chef. I also endorse Kericho Gold Tea and the Envirofit SuperSaver Charcoal Jiko; I started endorsing it many years ago. I’m so honoured because looking at East Africa I might be the only chef to endorse a car. As a chef you cannot just be stuck in the kitchen and endorse any food products. I want to travel; I want to drive in style. I drive a cruiser and a trail blazer. I represent many brands but I wouldn’t want to go deep into it because there might be a conflict of interest.

I work throughout the year. It’s difficult to go on vacation but Mombasa is basically my vacation spot since it’s my hometown. I get to relax a bit with my wife and two girls. But I hardly have enough time to do that since I travel a lot for work. I go to the States at least three or four times a year to film my shows and to Dubai frequently to work on my publications. Travelling to me is like work-vacation.

I’ve been in the industry for 13 years. I started right after high school when I was 16, I started school really early.

I’m a chef who grew to be a public figure, and people always ask If I will ever be a politician, but no, politics is not my thing. I want be a leader but not in politics. I’m the official brand ambassador for the Kenya Chefs Association which is under the World Association of Chefs Societies. In the future I see myself as an ambassador to the world, I want to be a delegate but still retain my career as a chef. I want to break barriers and make change, so, in future whoever will be president I want to be the Kenyan ambassador, just so they know.

I’m writing my official cookbook, but I have done a couple of publications for radio Rahma, we have worked on a few booklets. My cookbook will probably launch early next year and consist of 50 amazing recipes and available ingredients in the market.

I’ve cooked for many high profile personalities. Back when I used to train at the Sarova Hotels I had an opportunity to cook for former President Kibaki and served him too. I have cooked for various ambassadors, cabinet secretaries and the who’s who locally and internationally. I would want to cook for President Kenyatta, I feel like he’s the coolest president, I admire him.

I’m a fashionista and a model. I work with brands like Kaveke whose showcased designs in New York City. I’ve also worked with Eddie kirindo and photographer Mohammed Abbas.

I have a positive outlook on life. I never want to put myself in negative situations because I feel like I will be giving away my blessings. My lowest moment was when I lost my grandfather who was my inspiration. I was doing my finals at Utalii when he died. I was about to graduate, of course before I graduated as the top student back then (laughs) It really affected me.

I realised I was famous when people started noticing me on the streets, some girls would even shout my name. I try to be humble about it. But people are sometimes afraid of approaching me. I’m easy and fun. People’s first impression of me is that I’m a serious guy. I’ve had scenarios where people tell me they thought I was mean and I’m like ‘why?’  It’s probably because of my uni-brow which makes me look like angry birds all the time (laughs).

CRAZY! These are the Funny Pics Going Viral on Social Media < Previous
Prediction: Sonko vs Kidero.. Who Will Take Nairobi? Next >
Recommended stories you may like: