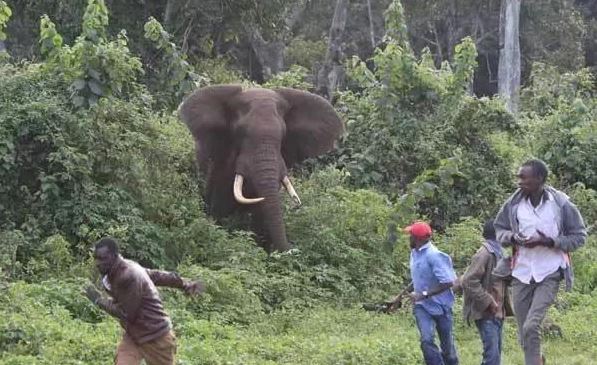 Another incident of human-wildlife conflict has claimed the life of a man in Naari, Meru County.

Naftali Karani was trampled to death by a stray elephant on Wednesday as he and other residents joined forces to drive away the elephants from their potato farms.

“Does the government value elephants more than its people? How come no one is concerned about our safety after many intrusions by wild animals,” said Miriam Mungania, Karani’s sister-in-law.

The midnight incident comes days after residents held demontrations on Friday to protest rampant killings by the animals.

Mungania said they have been forced into taking dangerous measures as men are sometimes required to sleep outside to drive away the jumbos.

According to Buuri Jubilee MP candidate Mugambi Rindikiri, the wildlife invasions have also affected learning in the area as children are sometimes unable to attend school for fears of attacks.

He called on authorities to construct an electric fence, saying there have been significant economic losses by the farmers.

Rindiriki also claimed the Kenya Wildlife Service has been reluctant in compensating those affected by the invasions.

VIDEO: Watch Eric Omondi Talk About Working on Boomerang’s New Comedy Show < Previous
‘I Will be Bankrupt and Hopeless if I’m not Reelected.’ Siaya Governor Pleads (VIDEO) Next >
Recommended stories you may like: