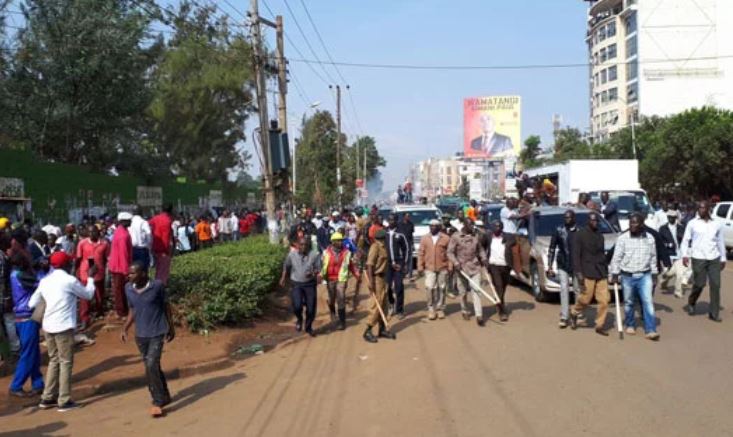 The National Super Alliance (NASA) campaign rally in Thika ended in chaos when supporters of the ruling Jubilee Party clashed with those of the Opposition.

NASA co-principals Raila Odinga and Musalia Mudavadi had convened their public meeting in Thika town but it was disrupted by rowdy youth.

Minutes after Raila Odinga began his address outside Thika Stadium, the youths shouted him down forcing him to cut short his address.

The irate youths thereafter hurled stones at the two NASA principals, forcing their security detail to whisk them to safety.

Police were forced to lob teargas canisters to disperse the crowd.

The NASA leaders also faced hostility in Githurai when Jubilee supporters pelted stones at their convoy.

They were also heckled in Kenol, Murang’a County.

Winter is Here – White Walkers Invade London (VIDEO) < Previous
OMG! Nyeri Businessman Uses Cockerel Given by Witchdoctor to Guard his Bar (PHOTOS) Next >
Recommended stories you may like: