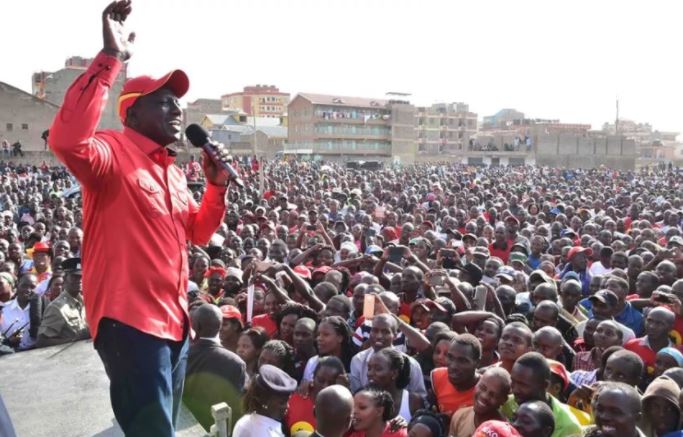 Deputy President William Ruto while on a campaign tour of Nairobi on Tuesday was met by a hostile crowd in Embakasi East Constituency.

In a video shared on the internet spaces, irate residents of Tassia estate are seen and heard chanting ‘Unga’ and ‘Nasa’ slogans at Ruto’s convoy.

The DP who was waving at the crowd from his vehicle’s sunroof was forced to duck back inside as the chants grew louder.

The video was shared by ODM’s Embakasi East Parliamentary aspirant  Babu Owino, who is alleged to have hired the youth to heckle Ruto and his Jubilee opponent Francis Mureithi.

Ruto later addressed a huge crowd in Tassia and urged them to vote Jubilee for the prosperity of future generations.

“As a cosmopolitan county, Nairobi has provided an exemplary example of brotherhood, friendship and unity across all communities. Let us stand as one to achieve prosperity and secure future generations,” stated the caption on Ruto’s social media pages as the theme of his Nairobi campaign tour.