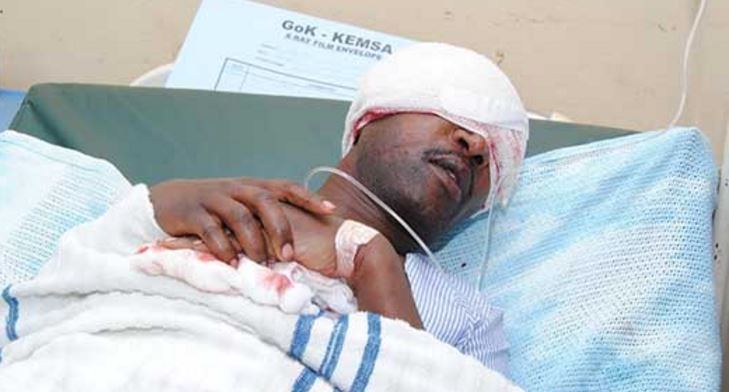 A man is nursing severe head injuries sustained from gunshots after his friend – a police officer – shot him following a disagreement over Sh400 debt.

Samuel Onsoro, owner of Friends Club in Elburgon town, and Constable Isaac Wanjala were drinking at the pub when the disagreement ensued.

Speaking at his hospital bed at Nakuru level five hospital, Mr Onsoro told Nation that the officer was a regular at the club and that he rarely cleared his debt.

“On Wednesday around 2 am, Wanjala came into the club..he bought me a bottle of beer and bought one for himself as well but when the waiter brought the bill, Wanjala refused to pay it,” Mr Onsoro narrated.

He said he called the Officer Commanding Station (OCS) at Elburgon who told him to confiscate Mr Wanjala’s phone until the debt was paid.

“I took the phone and we walked out with Wanjala hurling insults at me. He threatened that he would shoot me but I did not think he was serious.”

Mr Onsoro narrated that he, together with a friend, proceeded to Club 50 where the shooting occurred.

A source revealed to Nation that: “Mr Wanjala went to the police quarters which is about 200meters away from Club 50, took his G3 rifle and followed Mr Onsoro where he shot him on the head. He then shot himself on the neck, dying on the spot.”

His body was moved to Elburgon sub-county mortuary.

According to the nurse in charge at Nakuru Level Five hospital,

the bullet entered the head through Mr Onsoro’s left side and exited through the right eye.

“His right eye is completely shattered but the left one can be reconstructed,” Ms Florence Nzomo said.

She said that Mr Onsoro was in a stable condition although he had lost a lot of blood.

“Investigations show that the two did not have any history of arguments or strife. It was a decision purely influenced by too much alcohol intake,” Mr Kamanza said.

All The Trending Images This Thursday < Previous
It Wasn’t Me: Jakoyo Midiwo Disowns Photos of Man Clobbering Another Man… But It Really Looks Like Him Next >
Recommended stories you may like: