Uhuru Dismisses NASA Lineup as ‘Jobs for the Boys’ 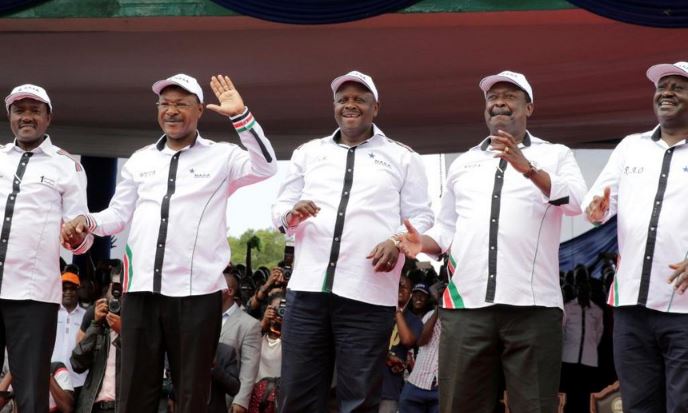 President Uhuru Kenyatta has dismissed the NASA power-sharing lineup as nothing more than a ploy to create jobs for its leading figures.

Uhuru said the opposition politicians have lost focus of what leadership means by wasting their energy on how to create positions of power for themselves rather than spending their efforts to improve the welfare of Kenyans.

He said the Opposition group has for a long time been hoodwinking Kenyans with a promise to provide an alternative only to end up with a blueprint for jobs for themselves.

“This was never about the country. It was about giving jobs for themselves instead of the millions of Kenyan who need jobs,” he said on Thursday.

Uhuru said the Opposition leaders have also demonstrated they do not promote growth of democracy and respect for the Constitution by including non-constitutional positions in their lineup.

“While they are lying to each other about Prime Minister and Deputy prime Ministers positions which are not in the constitution, we in the Jubilee Party are busy committed to entrenching democracy to develop the country,” he said.

The President said the Jubilee Party has demonstrated its interest to deepen democracy by conducting free, fair and transparent nominations.

In contrast, the opposition has conducted shambolic nominations that ended in anarchy and where certificates were dished out to preferred candidates, said the President.

Uhuru was speaking during a tour of Kiambu county where he thanked residents for participating in the primaries.

He also thanked the residents for exercising their democratic rights to give him a new team to participate in the August 8 elections.

Deputy President William Ruto said the difference between the Jubilee Party and the opposition in terms of promoting democracy was clear like day and night.

He said the Jubilee Party has conducted transparent nominations where voters have made real choices whereas the opposition literally auctioned nomination certificates.

The DP also dismissed the opposition lineup as worthless as far as the progress of Kenya is concerned.

“There is a difference between sharing positions between the elite and creating wealth for our people,” Ruto said.

He said the Opposition has for more than a year promised Kenyans they would announce a new lineup but ended up naming the same people who vied for elections in 2013.

“These are people who are only interested in fake stories and lofty positions,” the DP said.

The President and the DP were accompanied by a host of leaders including Governors Ken Lusaka (Bungoma), Hussein Dado (Tana River), Salim Mvurya (Kwale) and Taita Taveta Senator Dan Mwazo.

They were also accompanied by candidates nominated for various positions in Kiambu County led by Ferdinand Waititu who is vying the governorship on a Jubilee ticket.

All The Trending Pics This Furahiday < Previous
How The God of Waititu Has Worked Wonders for the Incoming Kiambu Governor Next >
Recommended stories you may like: