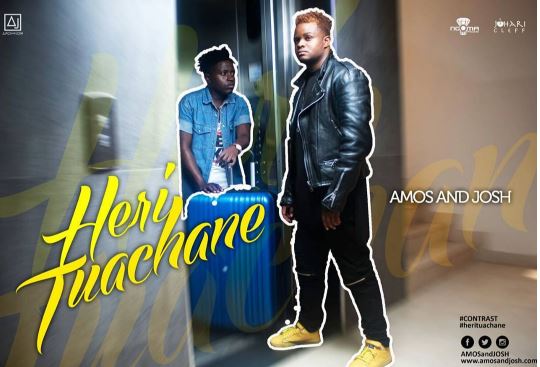 No sooner had it been uploaded on Youtube than it was taken down!

Amos and Josh new release, ‘Heri Tuwachane’, the fourth song from the duo’s true story album dubbed ‘The Contrast’, has been pulled down after Amos’ ex-girlfriend got offended by the song and threatened suicide.

Produced by Bruce Odhimabo, “Contrast” documents the story of a young man in love with a girl, and how this infatuation with her sets off a chain of events, gradually revealing a greater web of lies, deceit, and regret.

It’s a 12-part series. First 6 videos are about Amos and the last 6 about Josh

The fourth single tells the story of how Amos’ ex-girlfriend cheated on him with a rich man/sponsor.

A statement from Amos and Josh, said of the video:

“The fourth video is a sad stage for their once beautiful story of love. The video showcases the stage of doubts and trust. The girl is caught cheating with a very rich man (what is known as sponsor in Kenyan slang) Josh gets to see the girl Amos is seeing walking out of the house with him while seeing him off. Josh breaks the news to Amos who is away to see a client. He breaks down and concludes that their love has ended. He goes back to pick his stuff despite the girl trying to stop him not leave her.”

Reports reaching our news desk have it that Amos received a call from the ex’s mum telling him that his ex-girlfriend was going through serious depression and was suicidal.

“I got a call from her mum. She said she was very depressed…I’m an artiste and we write things people can relate to. Somebody’s life is not worth a song,” said Amos.

“Though we had sent the track to most DJs and some radio stations, some of who are still playing it, we had to take it down,” he added.