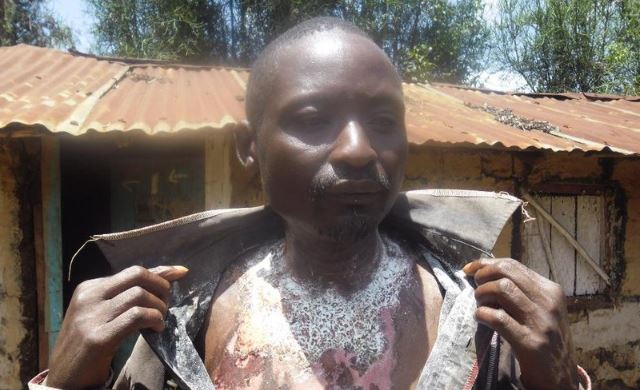 A man suffered severe burns on his neck and chest after his lover carried hot water to a bar and splashed it on him on suspicion that he was cheating.

The man, Peter Waithaka,  is said to have engaged in a row with Leah Nyambara at Kang’oo shopping centre in Gatundu North on March 10.

“Nyambara found me taking my beer at a local bar and started shouting at me. I asked her to leave me alone but as I took more beer with my friends, she went to her house, boiled water and put it in a thermos then returned to where we were,” narrated Waithaka.

“She splashed the water on my chest unexpectedly. She suspects that I have another girlfriend. That is what prompted the row.”

Speaking to journalists outside his house on Sunday, Waithaka said he regained consciousness at Igegania Level 4 Hospital and was admitted for three days.

He said Ms Nyambara went into hiding after she was confronted by a lynch mob.

Waithaka reported the incident to Mwea police officers. He said he wants action taken against the grocery store owner.

He also wants Ms Nyambara to pay for damages and take care of his medical expenses.