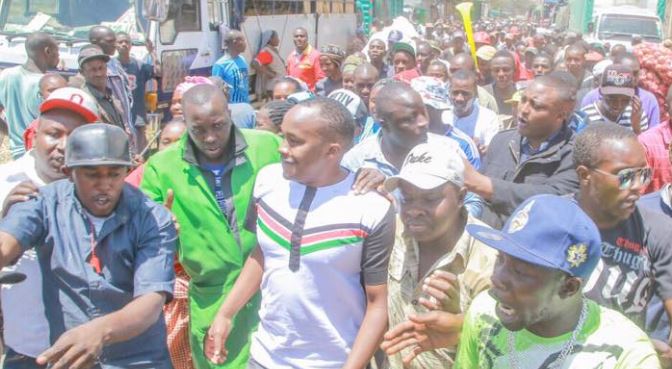 Musician Charles Kanyi aka Jaguar has denied that an incident in which a man was killed in fight over money in Ziwani did not happen during his political rally.

Newspaper outlets report that a man was killed by a mob after he grabbed money that had allegedly been given out by Jaguar on Saturday and gave out some money to a youth group.

According to police, the deceased grabbed the money and ran away as others pursued him. He was later found dead after being beaten.

However, speaking exclusively to Radiojambo, Jaguar said that he neither toured the Ziwani area where the incident happened nor did he offer money to any particular group of people.

According to Jaguar, who has declared that he will vie for Starehe MP in the August 8 General Election, he was on a goodwill mission in Ziwani area through his Jaguar foundation where he donated a number of car washing machines.

He said that he never at any time gave out cash to anyone.

“I was told that the man died at 7:30pm in an area where I never even set my foot in so there’s no way that story is related with me. What we did we went to give out car wash machines not money and I was out of the place by 5:30pm so you see these are mere propaganda because how can you grab the said money at 5:30PM then get killed two hours later?” quipped Jaguar, adding that if the alleged group would have been fighting over car wash ownership, then he would have been involved.

Listen to the phone interview with Jaguar below.

Betty Kyallo Soaks Up Some Sun in Dreamy Birthday Vacay in Zanzibar < Previous
OMG: Proud Kenyan Dad Uses Facebook to Congratulate Daughter for Being a Virgin Next >
Recommended stories you may like: