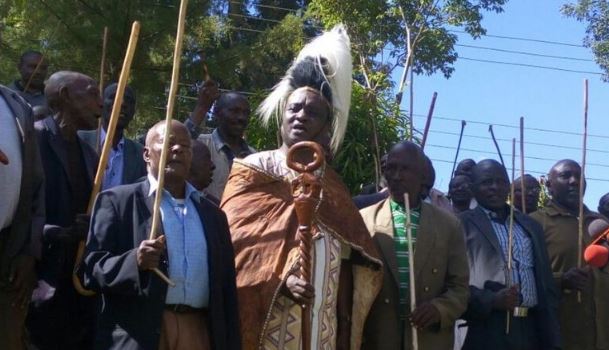 Imanyara, who received blessings from Njuri Ncheke elders at his Mariene home, said he will seek to recapture the Central Imenti MP seat on a Maendeleo Chap Chap ticket.

The former two-term MP made the decision after holding a closed-door meeting with elders.

His decision comes days after announcing his return to politics. During his declaration, the lawyer requested time to hold talks with Jubilee and NASA before announcing his party of choice.

“I am requesting for two weeks to hold talks with the Jubilee Party and the National Super Alliance coalition to establish what they have to offer. I will announce my party and launch the campaign after the deliberations,” said Imanyara.

Mr Imanyara had retired from active politics after he lost the Meru senatorial bid to Mr Kiraitu Murungi in 2013.

He says he is coming back to restore the image of the constituency.

“I had retired from politics but I was called by the elders and residents who told me matters were not being handled well….the development projects I started stalled. They asked me to make a comeback,” he said after the meeting with about 100 elders.

He added: “In the 2013 poll, I vied for senator on an ODM ticket but this time round the elders have told me to vie under Maendeleo Chap Chap. Its leaders have shown good leadership by campaigning peacefully and its structures are good, unlike other coalitions which are filled with fracas and abuses.”

Isaac Mwaura: Sonko MUST Apologize for Using Albinism to Abuse Peter Kenneth < Previous
Moses Kuria: Good Things Happen Only When Raila Odinga is out of the Country Next >
Recommended stories you may like: