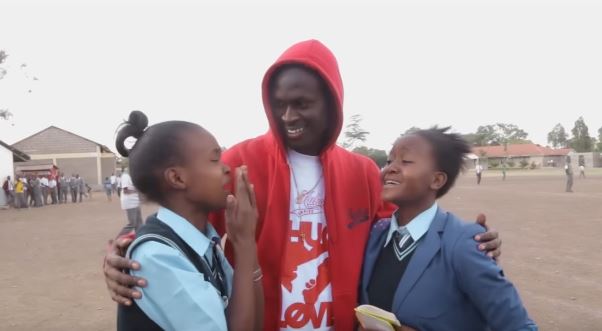 The fact that King Kaka has ardent fans and is widely adored has never been in doubt. The rapper recently found out just how much he is loved, when high school students completely lost their cool when they met him.

The rapper while on his ‘Mr 254 Tour’ was ‘ambushed’ by a group of girls, one of whom could not contain her emotions as she broke down into tears.

A clearly amused King Kaka, reveling in the one-of-a-kind adoration, hugged and held the girl in his arms in an attempt to calm her down but that only appeared to make matters worse as the girl wailed, shouted and almost pulled her hair off.

No sooner had King Kaka comforted the girl than another one came rushing in with an ipad for a photo ‘sesh.’ More screams and wails ensued as King Kaka engaged them in small talk.

If King Kaka’s famous ego was on a hundred, it has risen exponentially after this incident.

The Hottest Stories on the Internet Today (Wednesday March 22) < Previous
‘I love my baby!’ Eunice Njeri’s Ex-Hubby Flaunts His New Love (Photos) Next >
Recommended stories you may like: