Raila Odinga Claims IEBC Database has Been Infiltrated and Compromised 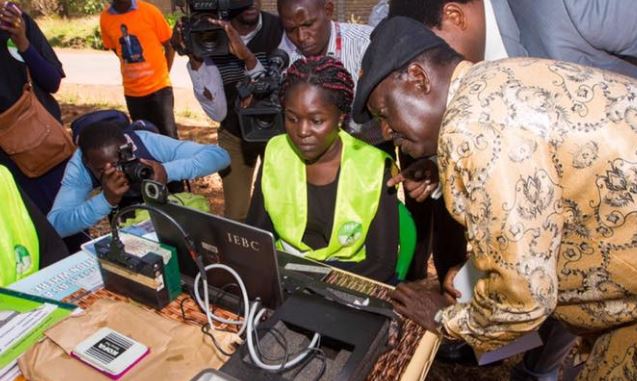 Opposition leader Raila Odinga has claimed that the IEBC database has been infiltrated and compromised in a grand scheme to inflate the number of registered voters in Jubilee strongholds.

Mr Odinga claims that the IEBC voter registration software had been re-calibrated to allow applicants with two-digit identity cards to register through collusion.

In a statement, Mr Odinga claims the doctoring of the IEBC registration software was done intentionally by former employees of IEBC who are aligned to Jubilee.

The statement reads in part: “We have unearthed serious anomalies in the on-going voter registration that bring to questions the integrity of the register being compiled and the figures being released by the IEBC.

Our investigation has confirmed that numbers that do not qualify as identity card numbers have been used to register voters in parts of the country and that is responsible for what is being presented as high turnout in voter registration in those regions.

A random check shows that the following numbers have been used as national identification cards to register voters.

The IEBC database has been manipulated to ensure that the cell that has the document identification number can take any numbers instead of the eight (8) numerical national ID or seven numbers if a passport is used.

We have information that the doctoring of the IEBC registration software was done intentionally by former employees of IEBC who are aliened to Jubilee as a way to ensure Jubilee strongholds register more voters.

The manipulation was done to ensure that single digit number such as the ones listed above can be used to register foreigners or even those without IDs.

But it is also possible that the names popping up under the fake ID numbers may be non-existent. These could be virtual voters, non-existent human beings being included in the IEBC register to create room for ballot stuffing during elections.

Information in our possession is that the doctoring exercise is currently being carried out in homes of a senior government official and the office of a former cabinet secretary.”

In a quick rejoinder, the IEBC denied Odinga’s claims and reassured Kenyans that the voters register is intact.

IEBC boss Wafula Chebukati confirmed that some of the numbers highlighted by Odinga are part of the 128,926 ID numbers that are subject of the ongoing cleanup process.

The Commission wishes to assure that the process of cleaning up the register is in good hands. There should be no cause for alarm and Kenyans must focus on registering as voters given that we have only two weeks left,” said Chebukati.

Armed Robbers Raid Home of Homa Bay Governor in Karen, Steal Cash and Jewellery < Previous
Bomet Governor Isaac Ruto to Join NASA This Saturday Next >
Recommended stories you may like: