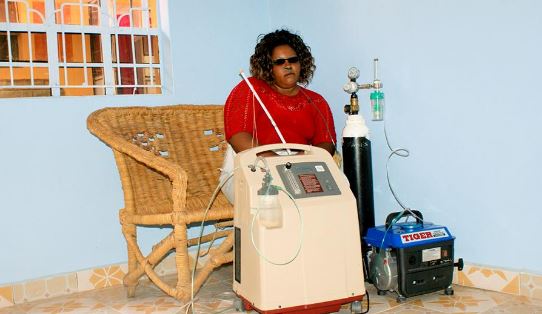 Gladys Kamande, the terminally ill patient who melted on social media with her struggle to stay alive is recovering well and can now walk unaided and possibly even run.

Ms Kamande’s story inspired a funds drive that raised over Sh 7 Million to cater for her specialised treatment in India for a lung reconstruction surgery.

Ms Kamande’s struggles began in 2000 when she lost her pregnancy after she was found to have a wound in her womb.

In 2002 she lost another pregnancy after her third operation.

Read her full story:  “I’ve Undergone 10 Operations With The Last Leaving Me Blind.” This is My Sorrowful Story

Last December, she was making headlines after an incident in Thika that left a street urchin in tears.

Read: It Can Always Be Worse: Thika Streetboy Moved To Tears After Begging from Woman Who Carries Oxygen Tank To Survive

Now, things are looking up for Ms Kamande who has for the last six years been surviving on oxygen cylinders that she walked with everywhere.

She can now walk unaided after specialists at Kenyatta National Hospital intervened.

He said Ms Kamande is finalizing on her travel plans to seek treatment in India.

“Hopefully by Monday next week, Gladys Kamande will be seeking specialized treatment in a foreign country but with faith she will finally do away with all the equipment she’s been carrying around,” wrote Nyoro.