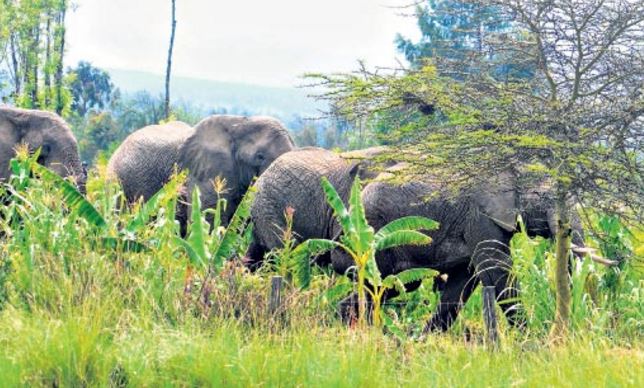 Residents of Sagalla in Voi, Taita Taveta County, are fearing for their lives after more than 200 elephants invaded their farms.

A middle aged woman on Monday died of shock at Mghange village after she saw a herd of elephants outside her house.

According to her relatives, Ms Florence Wangai died on the spot after seeing the elephants destroy her chicken house.

Farmers in the area have accused the Kenya Wildlife Service of failing to control the animals.

“The marauding elephants destroy farm structures, water pipes, crops, anything they come across. We fear that the animals might get more destructive and kill people,” said Mr Cromwel Mwachai, a resident.

“KWS has been saying they will drive the animals away as soon as possible but since last month they are doing little,” he said.

KWS assistant director in charge of Tsavo Conservation Area, Julius Cheptei, blamed the increased cases of human-wildlife conflict on the lack of an electric fence between Tsavo West and Sagalla area.

“In the last two weeks we drove out over 250 elephants but since it is a migration season we are unable to control them,” he said.

Mr Cheptei said the area is a migration corridor for elephants crossing from Mkomanzi Park in Tanzania to Tsavo National Park in Kenya.

He said the agency seeking a lasting solution and is planning to put up an electric fence.

Kajairo and Actor Padi Wubonn Blast Women’s Weaves in Hilarious ‘Salome’ Parody < Previous
Boda Boda Operator in Kakamega Trades Wife with Best Friend for a Bottle of Soda Next >
Recommended stories you may like: