Raw Video: Watch the Amphibious Jeep That Stunned Beachgoers in Mombasa Over Christmas 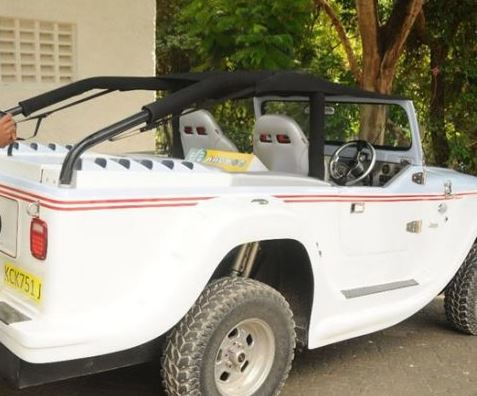 Over the festive period last month, holiday makers in Mombasa’s Jomo Kenyatta public beach were treated to a spectacle of an amphibious vehicle that had been cruising in the Indian Ocean.

No sooner had a video of the Jeep sailing in the ocean waters gone viral than the owner of the vehicle got in trouble with the Kenya Maritime Authority for flouting maritime laws.

The owner of the car, Simon Everett, presented himself before the police after he was alerted that detectives were looking for him.

In a letter to detectives, Everett said, “The vessel has been approved by the US Coastguard and is available for inspection at your convenience for compliance with Kenya regulations.

“Its for private use no more than 5NM from shore,” the letter reads in part.

According to reports, influential Mombasa businessmen and politicians have contacted Everett in a bid to buy the vessel.

After Quitting Classic 105 Radio Presenter Tina Kaggia to Launch Own Radio Station < Previous
Babu Owino Thrown Behind Bars While Demanding Release of Trigger Happy Businessman Next >
Recommended stories you may like: