Another One: Meru Man Hangs on Raila’s Helicoper, Waves to the Crowd from the Sky (VIDEO) 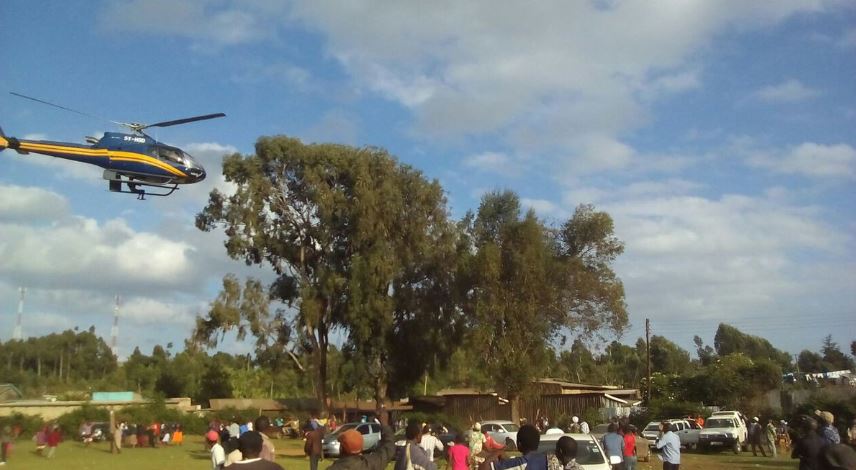 When the first one did it in Bungoma, he was applauded and given gifts. It was therefore just a matter of time before a copycat came along.

On Thursday, a man shocked residents of Meru after he clung on the helicopter carrying Cord leader Raila Odinga. The former PM was in the county for a voter registration drive.

Unlike his Bungoma counterpart who hang dangerously, this one had the foresight to sit on the landing skids, which enabled him to stay there for a much longer period. He even waved at the crowd.

It is unclear how far the man went, but from videos making rounds, it was quite the distance.

His identity and whereabouts are still unknown, and Igembe South OCPD Jane Nyakeruma said he might have gone with Raila to Nairobi.

“We have tried to follow up if the chopper dropped him in the nearby primary school but we have not traced him,” the police boss said.

The main hails from Thuuru Kathatene village in Igembe South, and according to residents, he had earlier expressed interest in boarding a helicopter for the first time.

The Trending Images This Furahiday < Previous
The Crown Jewel: Drone Footage of SGR’s Mombasa West Station Under Construction Next >
Recommended stories you may like: