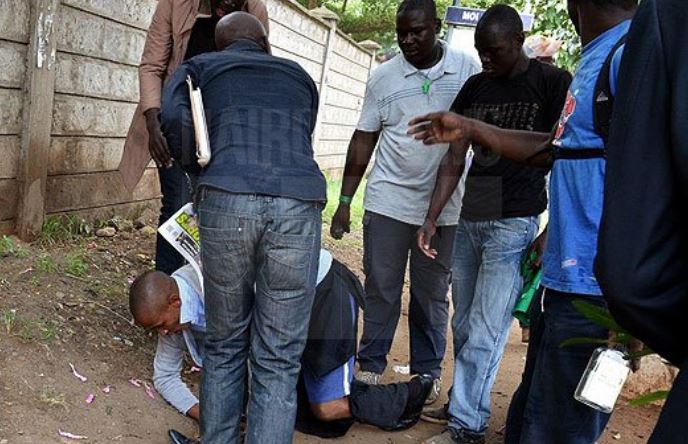 A distribution manager at Nation Media Group has shared on social media his story of how hooligans descended on him and his colleague on Monday during the Cord demonstrations. They were robbed off their values, beaten and left with minor injuries.

“My name is Francis Kago. On Monday at lunchtime, my colleague, Philip Velese, and I decided to have a meal at Trattoria on Wabera Street, Nairobi.
It was supposed to be a normal lunch break, where we would leave our office at Nation Centre on Kimathi Street, cross Kenyatta Avenue, and join Wabera Street.
But it was not to be. We were about to cross Kenyatta Avenue, at the ICEA junction, when we noticed a crowd massing on Kenyatta Avenue, chanting songs and generally causing chaos on the street.
Velese asked me whether I thought we would make it across safely. I surveyed the area and told him I thought we could.
What we had not noticed, however, was that a group of the rioters had broken from the main group and was terrorising people on the slip road near Simmers Restaurant.
We had just made it across Kenyatta Avenue when the breakaway group of about 20 youths cornered us.
Behind us, the main group gathered around us, rowdy and menacing.
As we tried to break away from them, one of the ruffians pushed me to the ground.
Velese, too was pushed onto the pavement, just before the junction of Wabera and Standard streets.
About seven of the attackers descended on me with blows and kicks, all the time trying to ransack me.
It was clear, from the moment they ambushed us, that they were on a mugging mission.
This was not a political demonstration, neither was it a crusade for civil liberties.
The thugs raining blows on Velese and I on the pavement of Wabera Street were only interested in what was in our pockets.
One of them grabbed my tie and tried to strangle me.
However, in the madness of the moment, or out of his own ignorance, he grabbed the wrong end of the tie, and so the noose could not tighten on my neck.
I escaped with a knee injury and a torn jacket
At this time I did not know what had happened to Velese. The world had gone dull on me.
I was lying on a city street, staring into the menacing, bloodshot eyes of a bunch of hooligans baying for my blood, and trying to save my skin.
I fought them off, all the while screaming to get the attention of passers-by, most of whom had scampered to safety.
My eternal gratitude goes to the man I caught, through the corner of my eye, hurling stones at the attackers.
BADLY OFF
Some of them, now scared of what might happen to them should the crowd surge on them, melted into the streets.
I quickly kicked and elbowed and slapped and punched my way out of the grip of the rest.
As I rose from the pavement, I saw Velese struggling across the street.
He was badly off, with his trousers torn and his phone missing.
I had also lost a few thousand shillings to the muggers, but I was alright.
I followed him to Italian Menswear shop, where he bought a new pair of trousers to protect the dignity the marauding gang had attempted to steal from him.
It was supposed to be a cool, relaxed, normal lunch hour in East Africa’s biggest metropolis. It wasn’t.”

‘Dead’ Protester Found Alive in Kibera.. Denies Rioting But Fails To Explain Stone in His Back Pocket < Previous
POLL: Do You Support Cord’s IEBC Demos? Next >
Recommended stories you may like: