BRAVERY!! Woman Fights for the Rights of a Boda Boda Rider After he was Harassed by ‘Kanjo’ (RAW VIDEO) 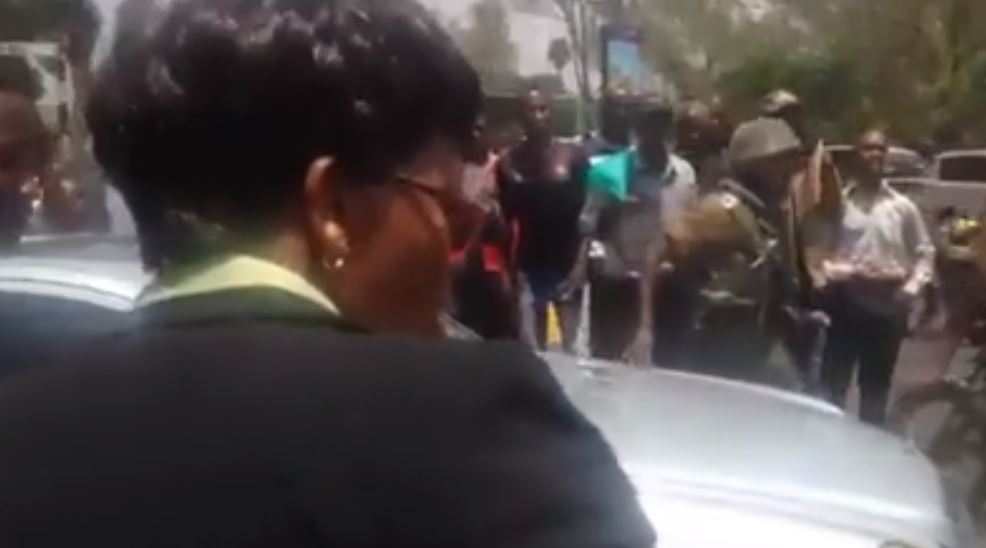 Usually, when something unfortunate is happening to someone in the streets of Nairobi, most Kenyans prefer to turn a blind eye. However, there exists decent human beings who restore faith in humanity through brave acts such as standing up to authorities who blatantly break the laws they should be upholding.
That was the case last week Friday when a woman identified as Rosemary Kamathi came to the rescue of a boda boda rider who was being harassed by city council askaris. As the story goes, the biker had wrongfully parked near Nyayo House, after which the askaris started beating him up and destroying his prized possession.
Rosemary stepped up and stopped them from further mistreatment. The whole thing was caught on camera and shared on social media by entrepreneur Sam Gichuru(He who made Seve Gat’s dreams of travelling to China come true).
He wrote:
“In a country filled with Injustices, we need more Rosemarys”
This biker made the mistake of parking next to Nyayo House, some city council askaris come out and beat him up as they destroyed his bike, a bystander Rosemary Kamathi saw this and she stepped up and stopped them. She also followed them to Nyayo house to make sure the young man was not harassed anymore.

Rosemary’s daughter sent this to me and said “As a law student , I always say I cannot practice law because of the injustices in the judiciary, but today, seeing my mother stand up for the rights of a common wananchi like myself, I got some hope, that it all starts with one person !”
Parents are the ultimate role models for children. Every word, movement and action has an effect. No other person or outside force has a greater influence on a child than the parent.
Mrs Kamathi, hope this short message gets to you, we appreciate your actions.

Hilarious: Evolution of Fashion and Other Short Funny Clips to Tickle Your Bones < Previous
Mbita MP Millie Odhiambo Gets the Photoshop Treatment After Parliament Raucous (Funny Photos) Next >
Recommended stories you may like: