MUST READ: A Letter to Nairobians From the Stray Lion 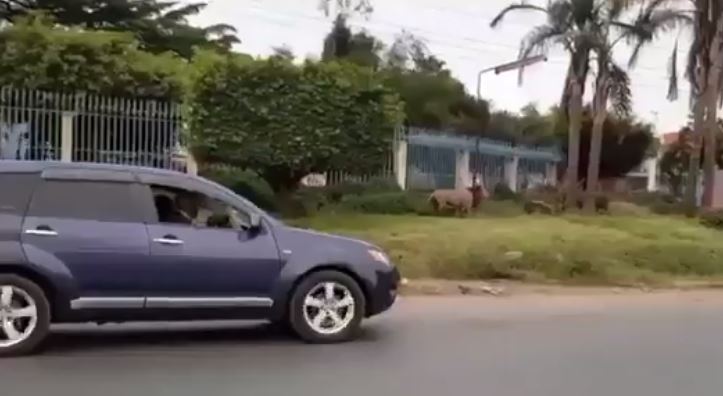 Dear Kenyans,
Hello from this side of the world. Greetings from the jungle.
I have been obliged to write you this letter following my appearances in your capital city last week.
Allow me to introduce myself. Here in the wild, they call me Ng’etuk, owing to my Kingly personality. I was the lion that strolled along Mombasa road a few days ago. I know I scared a few of you early risers. At this juncture, I wish to apologize for the slight misunderstanding I had with that mzee.
You see I felt that he was threatening me or something like that. I am the King, and threats simply  mean nothing to me. I spared his life so he could tell the story to his grandchildren, of how it felt to be massaged by a King’s manes with a heavy breath. I found it hilarious that he wet his pants. Pass my deepest apology to him.
Anyway the main reason why I write you this letter is to explain why we have been visiting your city. You will recall that a few weeks back, six lionesses were in Lang’ata. Well, let me clear that up. Those were not just lionesses; they were in fact, my concubines.
You see, I get privileges for being a King around here. I have a pack of thirteen pretty lionesses for myself. They help me relax my loins. They also, for all the good reasons, hunt down meals for me.
Before you judge me for what many will call promiscuity, it’s good to know that I am polygamous in nature just like all the African lions roaming the plains. I am informed that your urban women have strongly opposed this notion. Poor African men, aren’t you losing culture?
That said, after my six beautiful concubines returned from their detour in Lang’ata, they informed me of strange things they overheard as they strolled in the darkness of the suburbs.
Well, they told me that your city has a governor who once slapped a woman in public. Is it true? Well if it’s true, then I would love to see that man someday, because he would easily survive the jungle.
But the other loud mouth, who was slapped by his wife, who is he?  He needs a lecture on how-to-be a-husband-in Africa. He should shut up. But again, I am lion, so what do I know.
Your country I hear is so corrupt that your President-a heir of your founding father, shamelessly talks about it in his foreign trips.  He tells it in his speeches of how greedy his country men are. And talking about corruption, what is this thing called Eurobond? Did you guys ever have your answers?
Then there’s Chickengate. Wait, what are chicken doing on your gates, again? Somebody tell me!
Is it also true that your Deputy President is a hustler who travels around in jets? Forgive my many questions; my mind was blown by the happenings in your country.
Your judges, do they also take bribes before delivering their judgments? What a life you swim in ladies and gentlemen.
The youngest of my concubines mentioned a woman called Waiguru. I hear she is quite a thing. I was told that this woman-Waiguru, caused ripples in the city when one Thursday evening scandals followed her home.
These tales were so shocking I was obliged to come and see for myself the men and women who were allowing their country to rot; Men and women who were dictated by words of careless tribal politicians.
I had to come and see the city that was slowly eating into our natural habitat in the name of development. I had to see these men who were so eager to see us disappear like thinning smoke.
Forgive me for my surprise visit last week, but again I am the king, I can decide to roam my kingdom any day. You think Nairobi belongs to you? Heck No! That was once our home before you erected your buildings.
I wish to end my letter Kenyans.
But I have a message for you lovely people.  Be vigilant, Be your brother’s keeper, and Be honest. Because it is your individual straight characters, that will make you country beautiful. Be heroes in your homes, in your hamlets, in your offices. That way your moral standards will redefine Kenya.
I have to go; one of concubines keeps stroking my mane seductively. Honestly I can’t quite concentrate. We all know what she wants and I would be unfair to this darling if I fail to deliver.
Cheers Kenyans.
Yours Truly
King Ng’etuk of Enkare Nairobi
By Wesley Kipngenoh/ SDE