Honestly, as churchill show comedian Owago Onyiro keeps saying, ujaluo utatuuwa. If you are familiar with the Youth Fund Chairman Gor Semelang’o, you may have noticed that he rocks two watches, one on each wrist. Everytime Gor steps out he is wearing well over 520, ooo shillings worth of watches. Talk of living large. When asked by Nairobian reporters why he wears two instead of the ‘normal’ one, this is what he had to say.
“Many people have asked me why I bother and I have always told them that I’m a very serious businessman. One watch keeps me updated on local time while the other one is set for international business purposes.”
He says that each cost about Sh260,000.
“I like expensive watches from Rado, Montblanc to Swatch. Each one cost me approximately ksh 260,000.”
Apart from chairing the Youth Fund, Gor Semelang’o owns Talanta Africa Media, a company that published the defunct Truth Weekly newspaper, among other magazines. He is also said to have some businesses in Nigeria. 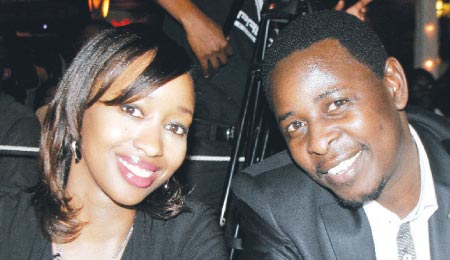 Some time last year, he was rumoured to be dating Citizen TV’s Janet Mbugua. That was however never confirmed.