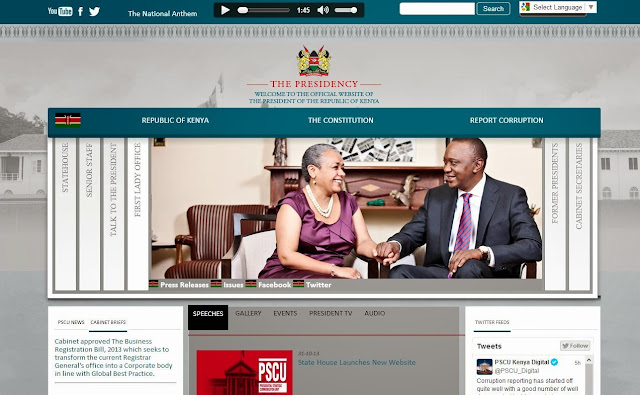 Yesterday, president Uhuru’s digital team unveiled a new website that will among other things let Kenyans report corruption directly to the president.
It’s first day was characterised by lots of downtime, but hopefully that should be sorted out soon.

Kenyans will now be able to book an appointment to statehouse online. All you need to do is fill in a form indicating, among other things, the number plate of the car you intend to visit the house on the hill in.
You also indicate the name or office of the person you intend to visit. It’s not clear whether it will be possible to see the president through this method.

The website launch was however dampened by news that the site design is not original. Apparently, the Kazakhstan’s presidency website looks strikingly similar.
The makers of Uhuru’s site did not even change the colour.
It appears as if they used a similar script or theme.

A lot of people voiced their concern that Kenyans cannot be original. Others wondered how much the designers were paid, only to duplicate someone else’s work.
Someone even suggested reporting that as the first act of corruption.

‘Government blogger’, Dennis Itumbi was however in the front line defending the government, and basically the digital and new media department that he heads.
He said that the code used to make the site is available in the open market. He also suggested that what matters is the information and not the template.

The Presidential Standard adopted by Jubilee is Blue – we adopted it – More visibility of National Colours can still be achieved as we go on
— Dennis Itumbi (@OleItumbi) October 31, 2013

@OleItumbi A website is about the information it presents. The template used is of ZERO consequence. Smart pple ask the right questions.
— Top Shelf! (@richardmugeke) October 31, 2013

The new site will offer a mix of innovative products, that will open up the Presidency like never before -Content is what websites are about
— Dennis Itumbi (@OleItumbi) October 31, 2013